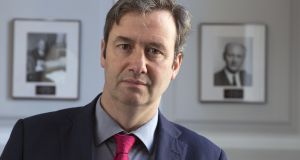 Michael D’Arcy was elected to the Seanad from the agricultural panel in March and his vacancy will be filled by a byelection. Photograph: Dave Meehan

Former junior finance minister Michael D’Arcy is to resign his seat in the Seanad to become chief executive of the Irish Association of Investment Management (IAIM), the representative body for the funds and investment industry here.

Mr D’Arcy, who worked on policy towards the funds sector in his role as Minister for State with responsibility for financial services and insurance, takes the job as the industry faces major changes in the wake of Brexit.

Mr D’Arcy, who was a Fine Gael TD for Wexford from 2016 to 2020, lost his seat at the last general election and was subsequently elected to Seanad Éireann. As minister of state from mid-2017 until the new Government was formed in June of this year, he was actively involved in policy formation for the International Financial Services sector and launched a new strategy for the industry in April 2019.]

The IAIM represents the funds and investment sector and works with government on key policy issues.

“Brexit represents a unique opportunity to develop Ireland further as a credible leading investment management centre,” Mr D’Arcy said. “In that regard Ireland will need to continue to develop its skills base, and the promotion of education and training will be key.” He said there are opportunities to develop the IFSC as a green finance hub for funds supporting environmental and green projects.

Mr D’Arcy will work with IAIM chairman John Corrigan, who was previously head of the National Treasury Management Agency.

He said his work in politics and particularly his role in the development of a new IFS strategy had given him an understanding of the role the sector plays in our economic development.

Asked if he expected any controversy about his appointment, given his recent role as a minister of state, Mr D’Arcy said he didn’t know if this would happen. The path from public to private sector and back was common in other jurisdictions such as Germany, the UK and France, where people “can flow in both directions”.

Guidelines from the Standards in Public Office Commission for Irish ministerial office holders say they should be careful to avoid any real or apparent conflicts of interest, particularly immediately after leaving office.

Mr D’Arcy said he “never planned to grow old in politics”, having served in various roles over 20 years. “The opportunity is there now and I have decided to take it up.”

He was elected to the Seanad from the agricultural panel in March and his vacancy will be filled by a byelection.

1 How long can Government afford to keep State pension age at 66?
2 Declan Ganley denies Donald Trump trying to swing lucrative 5G contract for Rivada
3 Brexit: UK and EU agree to intensify talks in rush for deal
4 Deutsche Bank says Irish borrowers face long wait for lower rates
5 An Post letter business collapsing under Covid-19 - CWU
6 Marquees and fleets of delivery vans: how supermarkets are ready for Lockdown 2
7 Black Friday has become Black November for Irish retailers
8 Irish house prices could buck European trend and fall this year, says S&P
9 Fair deal? Family at odds with hospital and each other not so sure
10 Giving your child a mobile phone: The pros and the cons
Real news has value SUBSCRIBE