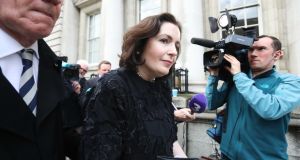 Bank of Ireland’s new chief executive, Francesca McDonagh, has hired a fellow former HSBC executive to fill the new role of chief of staff at the group, as the Briton seeks to put her own stamp on the country’s largest bank by assets.

Oliver Wall, who had worked with HSBC between February 2014 and July 2017, most recently as head of external affairs for the banking giant in the UK and Europe, joined the Irish company this week. His appointment was confirmed by a spokesman for the bank.

Mr Wall, a NUI Galway graduate who also previously worked with insurance group Aviva and as an adviser in the Department of an Taoiseach in relation to Ireland’s holding of the European Union presidency on 2013, will support Ms McDonagh in the execution of her strategic agenda and as in liaising with various division heads.

While novel in Ireland, the office of chief of staff is pretty common in the UK. HSBC, where Ms McDonagh (42) worked for two decades, has chief of staff positions at group level and across various divisions.

Ms McDonagh presided over the issuance on Thursday of Bank of Ireland’s first trading update since she took over the helm, signalling that the group is progressing plans to return to dividend payments to shareholders next year for the first time since 2008.

The statement, issued a day ahead of schedule, also indicated the bank may take an additional charge for costs relating to an industry-wide tracker mortgage controversy. However, it said any increase from the €25 million ring-fenced to date for customer redress and compensation for tracker mortgage overcharging, as it continues to search for impacted customers, should be “manageable”.

Owen Callan, an analyst at Investec in Dublin, estimates the bank may need to set aside a further €25 million to €125 million to draw a line under the problem.

Bank of Ireland has identified about 600 customers who were wrongly denied a tracker mortgage and a further 3,700 who were overcharged by an average of 0.15 on a tracker rate of interest. The company also said on Wednesday that it is carrying out a review to see if “other customers should be included in the compensation process”.

Meanwhile, the trading update said that the group’s level of impaired loans fell by €400 million during the third quarter of the year to €5 billion. The figure is less than a third of the peak during the financial crisis. New lending for the first nine months of the year rose by 3 per cent on the comparable period in 2016 to €10 billion.

The group’s common equity Tier 1 ratio, a key gauge of a bank’s capital reserves and ability to withstand surprises losses, rose by 0.3 percentage points to 12.8 per cent in the three months to the end of September.

However, the pace of increase slowed as bank continued to invest in an overhaul of its technology systems, saw a “modest increase” in its pension deficit and set aside an unspecified amount for a potential dividend payment to shareholders early in 2018.

The bank had booked an initial €70 million provision for dividends in the first half of the year.

1 Belgium helps Ireland to a Brexit boon
2 ‘My rent here is so low it’s a joke’
3 Can Grafton Street stop the flood of closures?
4 This charming man: how Paschal Donohoe won the Eurogroup presidency
5 New Powerscourt Springs hotel to open in defiance of virus gloom
6 Goodbody’s planned €155m sale to Bank of China falls through
7 Goodbody loses a second suitor as Bank of China deal falls through
8 ‘Sad day’ for House of Ireland as tourism retailer goes out of business
9 Water supply problems are not of Irish Water’s making
10 What is Covid Tracker Ireland?
Real news has value SUBSCRIBE