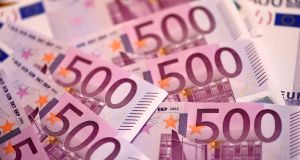 The total level of assets in Greek bank-sponsored loan securitisation vehicles registered in Ireland has grown from €700 million to €31.7 billion since the third quarter of 2018, the Central Bank says. Photograph: Getty Images

Greek banks have put €53.9 billion of Greek assets into Irish-domiciled special purpose vehicles (SPVs), according to figures provided to The Irish Times by the Central Bank in response to questions. SPVs are used to refinance loans both on international public bond markets, in a process known as loan securitisation, and in off-market transactions.

Much of the assets are made up of non-performing loans (NPLs), including consumer, mortgage and business debt, that Greek banks have been under pressure from regulators to remove from their books. Income from the loans are used to pay interest on bonds issued by the SPVs to investors.

The total level of assets in Greek bank-sponsored loan securitisation vehicles registered in Ireland has grown from €700 million to €31.7 billion since the third quarter of 2018, the Central Bank said. Other Irish SPVs hold €22.2 billion of assets that originated from Greek banks, it said.

Section 110 of tax laws introduced in 1997 to encourage companies to set up SPVs and make Ireland a global financing and fundraising hub have turned the country into one of the world’s main locations for such activities.

Lawyers, accountants and other firms in the International Financial Services Centre (IFSC) generate hundreds of millions a year in fees servicing SPVs, which play an important role in the flow of money through the financial system globally. They allow for assets to be ringfenced in tax-efficient entities to provide collateral to raise funding in the market.

A total of €859.2 billion of international assets were held in Irish SPVs as of the end of September, according to Central Bank data.

A research paper by Central Bank economists Brian Golden and Eduardo Maqui, published last week, said that a “herding behaviour” often plays a role in why banks from a particular country select the same jurisdiction to set up SPVs.

Irish SPVs became a particularly popular vehicle for Russian lenders to raise dollar-denominated debt in the past decade.

The European Banking Authority said in a report last year that Greek banks have relied on securitisation deals to shift non-performing loans off their books more so than straight-forward loan sales. This has been fuelled by the Greek government setting up a guarantee scheme late last year to offer some protection to buyers of bonds backed by risky loans in securitisation transactions.

The guarantee was first used by Athens-based lender Eurobank Ergasias earlier this year to shift €7.5 billion off its books through three securitisation deals. The SPVs holding the assets are all registered in Dublin, according to Companies Registration Office filings.

While the level of Greek NPLs has fallen from almost 50 per cent in 2016 to 36.7 per cent as of June, they remain by far the highest in the euro zone, according to European Commission figures.

Overseas buyers of Irish problem mortgages since the onset of the financial crisis have also used securitisation transactions to refinance loan portfolios on the bond market and take money off the table.

Permanent TSB turned in November 2018 to the securitisation market to shift €1.3 billion of restructured loans – mainly split mortgages where a portion of payments are warehoused until a future date. Bank of Ireland was working on a similar securitisation deal for NPLs earlier this year, but put it on hold as Covid-19 struck.

9 How well will the Irish economy recover in 2021?