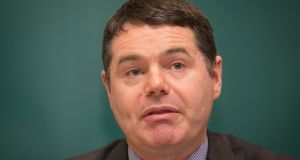 The banking culture which led to the current tracker mortgage scandal will not change until the banks are pursued through the courts, the Oireachtas finance committee heard yesterday.

Chairman John McGuinness, of Fianna Fáil, and Sinn Féin’s Pearse Doherty called on Minister for Finance Paschal Donohoe, who was appearing before the committee, to support class-action legislation, which would allow victims of widespread harm to come together in search of collective redress.

Mr Doherty said banks were “getting away with the biggest theft in the history of the State” with almost €1 billion wrongly denied to low-cost tracker mortgage-holders and yet the legislation had not provided them with an efficient route to legal redress.

Mr Doherty said his party had drafted class-action legislation on foot of recommendations from the Law Reform Commission.

Echoing Mr Doherty’s comments, Mr McGuinness said that until such class-action cases were taken against individual banks, they were unlikely to clean up their acts or change their culture.

“My current view is that the legal framework is in place to deal with this matter and the test of that will be work that the Central Bank can do,” he said.

The Central Bank’s trawl into affected customers has uncovered more than 33,700 cases where the banks either denied customers their right to a low-cost mortgage linked to the ECB’s main lending rate or applied the incorrect rate.

Earlier, he acknowledged there were currently no public interest directors on the boards of any of the State-owned banks.

1 Ireland must beware as digital tax reform enters critical phase
2 State may face €1bn in compensation in Covid-19 case, Press Up claims
3 How I managed to cut my mobile phone bill by at least a half
4 Lahinch Golf Club runs out of its own cash after €3m Covid-19 hit
5 Fiona Reddan: Who’s afraid of Revolut? Not AIB and BOI it seems
6 Son putting elderly dad under pressure to sign over land
7 Is Coveney the right man to lead Greencore out of Covid-19 crisis?
8 Reopening businesses can claim ‘restart week’ payment
9 Workhuman predicts double-digit revenue growth for 2020
10 Must I pay tax on sale of inherited apartment in Baltics?
Real news has value SUBSCRIBE