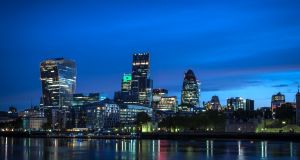 The City of London. Photograph: iStock

Moves that could force investment firms to transfer hundreds of UK jobs to the European Union after Brexit are being described by asset managers as a threat to one of the continent’s biggest success stories.

The investment-management arms of JPMorgan Chase and Co, Axa and Standard Life Aberdeen are among firms criticising a possible clampdown on mutual funds known as UCITS that are officially EU-based but often managed from elsewhere under a system known as delegation. Such funds oversee about €9.1 trillion.

“Delegation has worked extremely well historically and has been critical in making UCITS not just a European, but a truly global, success story,” said Massimo Greco, head of European funds at JPMorgan Asset Management. “We should take care not to tamper with a framework that has served Europe and global investors well over the past three decades.”

Europe is seeking to ensure that it will continue to have oversight of asset managers, and regulators have warned that “letterbox entities,” nominally based in Europe but managed from abroad, will not be tolerated. That makes London’s position as the second-biggest asset-management centre in the world more vulnerable as funds based in the UK have to re-register in the region, meaning hundreds of senior managers could have to relocate from London.

“It’s a land grab. It seems to me to be a very protectionist policy,” James Athey, senior investment manager at Aberdeen Standard Investments, said in an interview with Bloomberg Radio. Proposed changes in portfolio management and derivatives clearing are “about trying to ensure the UK is punished suitably.”

The European Commission wants the European Securities and Markets Authority to play a bigger role when firms plan to “outsource, delegate or transfer risks” to non-EU countries, according to a statement in September. A more powerful regulator would be able to reject the registration plans of funds if it deems that major decisions are not made by management based within the region.

Supporters of the existing UCITS regulation say the funds are successful precisely because managers can be based in locations where they invest regardless of where the business is domiciled.

“There could be serious managerial issues if existing portfolio delegations are withdrawn as a result of ESMA’s interference,” said Stephane Janin, head of global regulatory development at Axa Investment Management. “It is critical that the management of parts of portfolios is delegated to the best teams wherever they are in the world.”

The industry is not entirely against change. If ESMA wants to improve protection for investors it could make the UCITS framework more like the AIFMD regime covering hedge funds, which has stricter regulations on delegation, according to Janin.

While almost €1.1 trillion of UCITS fund assets are domiciled in the UK, according to PricewaterhouseCoopers, the implications may spread beyond the City of London. UCITS funds are often domiciled in Luxembourg and Ireland, but their managers can be based anywhere in the world to focus on the markets where they invest.

“The commission’s proposal would upend a successful regulatory framework and put at risk the global use of UCITS,” said Dan Waters, managing director of ICI Global, the global fund management association. “Sadly, investors would come out the greatest losers of all, facing fewer fund choices at higher costs.” - Bloomberg