Switzerland votes on whether to stop banks’ money making machine

Swiss vote on whether to change system for ‘real’ money 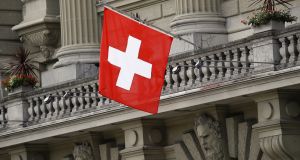 Supporters of a radical scheme to upend Switzerland’s financial system have made an 11th hour appeal to voters to approve a proposal to strip banks of the power to create new money through lending. Postal voting, which accounts for the majority of participation in Swiss referenda, is underway in the so-called Sovereign Money initiative, with the polls closing on Sunday.

Contrary to common belief, most money in the world is not produced by central banks but is instead created by commercial lenders when they lend beyond the deposits they hold for savers.

This arrangement, underpinned by the belief that most debts will be repaid, has been a cornerstone of the global capitalist system but opponents say it is unstable because the new money created exceeds economic growth. Swiss campaigners want to replace this approach, where banks regularly roll over their financing of loans, with a system of “Vollgeld” - which can be translated to “real money”.

“A large majority of people in Switzerland don’t want commercial banks to produce money out of nothing and believe only the SNB should have the right to create money in Switzerland - this is their chance to make this happen,” said Raffael Wuethrich, one of the campaign’s leaders said.

The Sovereign Money initiative would allow banks only to give credit to customers using funds they have from long term customer deposits, the Swiss National Bank (SNB) or money markets. “Our opponents have tried to make people afraid and insecure about our plans, but when people find these fears are unfounded they are coming over to our side,” said Wuethrich.

If the Swiss vote ‘yes’, the law introducing ‘real money’ would be written into the country’s constitution. It would then fall to the government to work out how to introduce it within three years. The referendum is in part the result of growing frustration in traditionally banker-friendly Switzerland with the financial sector, after the government bailed out the country’s biggest lender UBS in 2008. This, along with rock bottom interest rates for savers and sky-high pay packets for finance executives, has opened the way for a vote which could turn back the clock 100 years to when the SNB created most of the money used in the country.

“The banks have too much influence in Switzerland,” said Julian Baecker, a post-graduate student. “They have a lot of power without responsibilities. For example, the taxpayer had to pay for their mistakes during the financial crisis. “I think the Swiss people are more critical about banks than they used to be and something needs to change.”

One sovereign money supporter questioned why banks have the right to create money. “This kind of privilege often promotes riskier business models,” said Marti Alder. If voters back the campaign, Switzerland would become the world’s first country to adopt a sovereign money system, where the SNB will be the only authority allowed to create money in the country and banks will be barred from creating money when they make loans. One early poll had shown 44 percent of voters backing the initiative but support has slipped to 34 percent ahead of the vote.