‘Strong case’ for some customers on Covid-19 insurance – Department 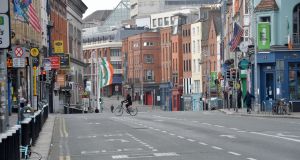 Companies refused coverage for Covid-19 losses under certain business interruption policies appear to have a “strong case”, according to Department of Finance officials. Photograph: Alan Betson

Companies refused coverage for Covid-19 losses under certain business interruption policies appear to have a “strong case”,according to Department of Finance officials.

“Business interruption is generally a feature of standard business insurance policies. However, whether a business can make a claim in relation to loss of earnings because of closure due to Covid-19 will depend on the specifics of each policy,” Department officials said in briefing notes, published on Monday, which were prepared for Minister for Finance Paschal on his return to office in the new Government.

“Insurers have argued that most policies they have written do not cover the risk as Covid-19 has either not broken out on the premises of the business or it was not a listed infectious disease. There are,however, other policies where there appears to be a level of ambiguity and in which we believe businesses have a strong case for cover,” they said.

FBD, the State’s only indigenous general insurer, revealed last month that it was setting aside a “precautionary reserve” of €22 million to cover costs on business interruption claims resulting from the Covid-19 lockdown, in the event it loses what are essentially test cases being taken by a group of pubs.

FBD’s pub policy and Lloyds of London insurer Hiscox’s coverage documents are said to have caused the most concern for businesses in Ireland because of the way they were worded.

“Engagement at ministerial and senior level within the CBI [Central Bank of Ireland] has taken place with the insurance industry and it has been made clear that insurers should engage with impacted businesses honestly, fairly and professionally to honour those elements of the policies covered, in line with the Central Bank’s Consumer Protection Code,” the Department notes said. “It has also been pointed out that where there is ambiguity in policies they should be interpreted to the benefit of the customer.”

However, the notes highlight that neither the Minister for Finance, nor the Central Bank can adjudicate where there is a dispute over a claim.

“Instead, complaints must be channelled through the Financial Services and Pensions Ombudsman or the litigation process,” they notes said.

An action taken in May by the Lemon & Duke pub in Dublin is among four test cases against FBD to be heard in October. Central Bank governor Gabriel Makhlouf told the Oireachtas special committee on Covid-19 earlier this month that his organisation has been taking legal advice and talking to “the insurance company” currently involved in litigation, known to be FBD.

Separately, a Law Reform Commission study on the possibility of capping personal injury award levels is being monitored, even as the recently-formed Judicial Council has been tasked with coming up with guidelines for such awards by courts.

The council is expected, in the course of its work, to look at personal injury awards in other jurisdictions, including the UK. The Personal Injuries Commission, established by the last government, found in 2018 that the average soft-tissue award in the UK was a quarter of the Irish average of €17,338.