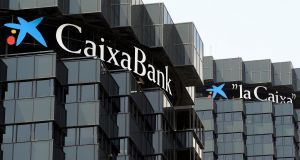 Shares in CaixaBank and Bankia rose sharply on Friday after the two Spanish lenders confirmed they were in talks about a potential merger. Photograph: Lluis Gene / AFP via Getty Images

Shares in CaixaBank and Bankia rose sharply on Friday after the two Spanish lenders confirmed they were in talks about a potential merger, a tie-up that would create the country’s largest domestic bank with assets of more than €650 billion.

Shares in Bankia, the smaller of the two groups, rose 29 per cent in early trading to €1.34, while Caixa gained 15 per cent, rising to €2.08, after the groups said they were examining an all-share merger, which would give them a combined market capitalisation of €16.6 billion.

The news also boosted shares in rivals including Banco de Sabadell and Bankinter, which rose more than 11 and 6 per cent respectively, as investors speculated that an agreement could spark a wider wave of dealmaking in the sector. Shares in France’s Société Générale and BNP Paribas gained about 5 per cent each, Germany’s Commerzbank climbed almost 8 per cent and Bank of Ireland rose 5.4 per cent.

A combined Caixa-Bankia would become Spain’s largest lender by market share in domestic loans and deposits, although it would not have the extensive overseas operations of Santander and BBVA, at present the country’s two largest banks.

Although the number of banks in Spain has already contracted from 55 to 12 since the 2008 financial crisis, regulators have continued to advocate consolidation as a means of lowering costs and improving efficiency.

Pablo Hernández de Cos, governor of Spain’s central bank, said earlier this week there was “a margin for [banking] mergers that would help strengthen individual lenders and the sector as a whole”.

José Ignacio Goirigolzarri, Bankia’s chairman, acknowledged as early as 2018 that the group could be a “perfect fit” for several of its rivals.

Benjie Creelan-Sandford, analyst at Jefferies, estimated that a combined Caixa-Bankia could cut up to 40 per cent of the smaller lender’s cost base through branch closures and job losses.

Bankia, whose market value rose to about €3.9 billion on Friday, was bailed out by the state in 2012 through a €22.4 billion rescue package after being hit by property losses during the financial crisis. The Spanish government, which has a stake of just under 62 per cent in the group, is keen to recoup as much as possible of these funds.

The economy ministry said its priority was to “maximise the value of the public holding [in Bankia] and strengthen Spain’s financial stability” and that the country’s bank rescue fund would analyse any potential deal “from the perspective of generating value and optimising the recovery of state aid”.

Alberto Garzón, the consumer rights minister, told Spanish radio on Friday that the best way to recover the bailout funds if the merger went ahead would be for the state to maintain a stake in the new bank. Analysts calculate it would be left with a holding of about 14 per cent in an enlarged entity.

Stefan Nedialkov, analyst at Citigroup, said he did not expect government intervention to pose a barrier to a deal, saying “a potential transaction would provide the [government] with a more liquid way of exiting its Bankia stake without disturbing its value”. – Copyright The Financial Times Limited 2020