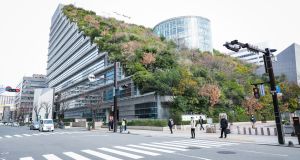 Green bond sales have ballooned in recent years, as states and companies seek to live up to the Paris accord.

Bank of Ireland has laid the groundwork to enter the burgeoning ‘green bonds’ market in the coming months, opening up a fresh funding source to finance customer projects in renewable energy, green buildings and clean transportation.

It is expected that the bank will raise between €300 million and €750 million in an initial green bond sale by the end of the year, subject to market conditions, which could make it the first Irish lender to tap this rapidly-growing area of international finance.

Bank of Ireland, led by chief executive Francesca McDonagh, is launching a framework document on Thursday to show potential investors in future green bonds from the bank how it will use money raised for projects that are in line with the International Capital Markets Association’s green-bond principles.

While rival AIB established a similar framework 12 months ago and has committed billions of euro to green projects, it has yet to issue green bonds.

Both banks signed up last year to United Nations principles for banks to work to support the 2015 Paris climate agreement and the UN’s sustainable development goals.

“Since then we have made great progress, providing nearly €600 million in green loans and mortgages across Ireland and making significant strides in transforming our own operations and reducing our property and carbon footprint,” said Mark Spain, Bank of Ireland’s chief strategy officer.

Setting up a framework to enter the green bonds market “ultimately enables us to finance more projects that mitigate climate change by reducing carbon emissions,” he said.

Pioneered by the World Bank more than a decade ago, green bond sales have ballooned in recent years, as states and companies seek to live up to the Paris accord and investor demand grows for socially-responsible investment opportunities.

Green bonds activity has been more muted so far this year as countries and businesses focused on raising mainstream debt amid the coronavirus crisis. Still, credit ratings firm Moody’s estimates that full-year green bond sales could still amount to as much as $225 million, driven by European issuers.

Ireland’s National Treasury Management Agency entered the market in 2018 with the sale of €3 billion of green bonds and raised an additional €2 billion last year. ESB became the first Irish company to sell such debt on the public bond markets in June last year.