Shareholders wiped out in 2012 when bank nationalised in €22.5bn bailout 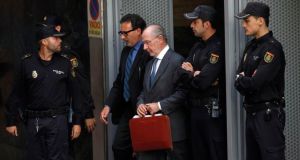 Rodrigo Rato leaving the High Court in Madrid after questioning in 2014 Photograph: Reuters

Former International Monetary Fund chief Rodrigo Rato should stand trial over his role almost six years ago in the ill-fated listing of Bankia, a Spanish court spearheading a long-running investigation into the case said on Thursday.

Bankia became a symbol of Spain’s banking crisis when it was nationalised in 2012 through a €22.5 billion bailout just a year after it was listed, wiping out its shareholders.

The High Court said Mr Rato, who was chairman of Bankia when the initial public offering (IPO) took place in 2011, and 31 other people involved in the listing should stand trial for failing to properly explain the bank’s situation.

The court’s recommendations on Thursday, after drawing a five-year-long preliminary investigation to a close, are among the last steps before formal trial proceedings.

The accused have a month to counter the court’s proposal, but it is unusual for a trial not to go ahead at this stage.

The court also recommended trial for Francisco Celma, a partner at Deloitte in Spain, for signing off Bankia’s accounts.

Mr Rato, who was once economy minister in Spain and a prominent figure in the ruling People’s Party (PP) before moving to the IMF, chaired Bankia for two years until just before its rescue.

He should be tried on charges of presenting false accounts in 2010 and 2011 and of fraud, for including erroneous data in Bankia’s listing prospectus, the court said.

The High Court opened a probe into the listing in 2012 after a small political party brought a claim.

Mr Rato was sentenced to 4-1/2 years in prison in February in a separate scandal over the widespread misuse of company credit cards during his tenure at Bankia. He has appealed against that decision to the Spanish Supreme Court.

Investigating judge Fernando Andreu on Thursday cleared the former governor of the Bank of Spain, Miguel Angel Fernandez Ordonez, and the ex-head of the stock market regulator Julio Segura of any criminal responsibility over Bankia.

The court said it deemed the central bank had not encouraged Bankia to go public and did not participate in creating a “fake” image of Bankia’s solvency.

Bankia replaced its chairman and chief executive in 2012 and has bounced back from the losses that triggered its rescue following a property market crash.

The government said in December it planned to privatise the bank, in which it has a 66 per cent stake, before the end of 2019.