Lender argues rate would have been prohibitively high in any event 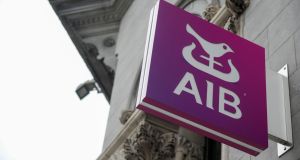 AIB has moved to clarify that a group of 5,900 customers who would have been entitled to avail of a prevailing tracker rate when they came off fixed-rate mortgage contracts from late 2008 can no longer avail of the prevailing rate.

Around late 2017, work was done within AIB to calculate what the prevailing rate now would be and the bank established it would be about 3.3 per cent, higher than many fixed-rate products on the market. The prevailing rate refers to the rate at the time customers became entitled to go on to a tracker.

The prevailing rate at the time this cohort of customers would have come off their fixed-rate contracts would have been at least 7.9 per cent, reflecting volatile market funding conditions at the time, the bank has argued.

Brendan Burgess, founder of online consumer forum Askaboutmoney. com, disputes that 7.9 per cent figure, and argues that the standard variable rate at that time was 5 per cent and as a result the tracker rate is unlikely to have been so high.

In February, AIB said it was in talks with the Central Bank on “potential appropriate treatment” of the group of 5,900 customers affected by the fallout. The bank also revealed at the time that the Financial Services and Pensions Ombudsman (FSPO) had made a decision on one of the 5,900 cases, finding against the bank.

The customers were written to in March 2018 and at that time given a 12-month window in which they could access the prevailing tracker rate but that window has now closed.

AIB on Friday evening confirmed it had accepted a finding by the FSPO in respect of one case and would apply the finding to all other affected customers within the same cohort.

As a result, customers will now find their mortgage balances written down by 12 per cent while they will also receive a cheque for interest payments paid on the relevant capital.

According to Mr Burgess, this amounts to an average write-down of about €24,000 and a cheque for about another €8,000 for those customers, “most of whom know nothing about it”. The new terms do not affect their inability to access the prevailing tracker rate.

The Central Bank has welcomed the decision by AIB to “provide further significant redress to a group of customers affected by tracker mortgage failings at the lender”.

“The Central Bank will continue to monitor the outcome of all complaints, FSPO decisions and court cases and will investigate any outcomes that may give rise to a systemic or wider customer impact, and take appropriate action with lenders as required.

“The Central Bank’s enforcement investigation of AIB in relation to tracker mortgages continues,” a spokesman told The Irish Times.

AIB, which had set aside €300 million to deal with this group, said the customers would receive payment in July and August.