Shoppers cautious in the run-up to Christmas 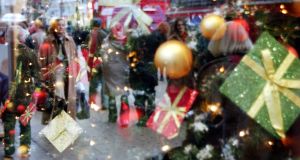 There is little evidence of any feel-good factor that might suggest the prospect of a spending boom over Christmas.

Irish shoppers are likely to adopt a cautious approach to Christmas this year as consumer sentiment edged lower for the second month in a row in November following a rail strike.

The KBC Bank/ESRI consumer sentiment index slipped to 103.6 in November from 104.8 in October, continuing a modest decline from September’s 18-month high of 105.8.

KBC economist Austin Hughes said the drop could be attributed to a slight downgrade of the State’s economic prospects. While consumers still view prospects positively, they remain very sensitive to any potential threats to the Irish economic recovery.

“We think developments such as a rail strike during the survey period and uncertainty over a proposed Apple data centre may have affected thinking as to the strength and durability of the recovery as well as the outcomes it is now delivering,” he said.

“It should be noted that current levels of the survey remain consistent with a broadly positive outlook on the part of Irish consumers and this is also translating into solid growth in retail sales.”

“While this may constrain the pace of increase in consumer spending over the Christmas period, strong gains in employment and faster income growth than inflation imply a healthy increase on last year’s outturn appears likely,” he said.

In broad terms, the November sentiment survey results suggest that Irish consumers are cautiously positive but they remain very sensitive to risks to the economy and their own finances.

“As such, there is little evidence of any widespread feel-good factor that might suggest the prospect of a broadly based spending boom over the Christmas period,” added Mr Hughes.