Revenue plans to fully digitise PAYE taxation in Ireland by 2019 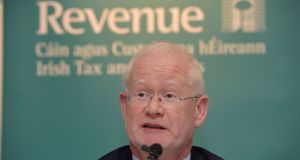 Revenue chairman Niall Cody: “A real challenge for Ireland is that 80% of all imports and exports come either to or from Ireland through Britain”

The mountains of paperwork that go with monthly and quarterly tax returns will soon be done away with under the Revenue’s plan to fully digitise PAYE taxation in Ireland by 2019.

Revenue chairman Niall Cody described its PAYE modernisation programme as the biggest shake-up in the State’s tax system since the introduction of self-assessment in the late 1980s.

Addressing a breakfast event organised by the Chartered Institute of Management Accountants, Mr Cody said the new system would eradicate bureaucratic form-filling, removing the P30, P35 and P60 tax forms from the system in favour of a more streamlined digital process.

Full-time reporting, integrated with business processes, was the future, he said.

While employees are expected to benefit from the changes, receiving entitlements from tax allowances and credits more quickly, employers have complained they may incur additional costs by having to provide information on a real-time basis, especially those without the technology to provide ongoing updates.

“The objective of the project is that employers, employees and Revenue will all have access to the more accurate and up-to-date information relating to pay tax, PRSI and USC deductions,” Mr Cody said.

“The purpose is to ensure that the right amount is collected at the right time from employees, and employers pay the correct liabilities when required.”

The real-time data will also ensure that employees get the full benefits of credits and reliefs “in year,” he said, noting there were about 250,000 workers in the Republic with multiple employments, who often ended up paying the wrong tax.

From the perspective of employers, Mr Cody said there would be no change in the payment process. “We’re not moving to take tax as the pay happens even though that would have been an option. This wasn’t about changing payments or interrupting people’s cash flow.”

He cautioned, however, that the shift would require a significant overhaul of current practices.

Pointing to a similar move toward real-time payroll tax reporting in the UK, Mr Cody said the companies that struggled most with the change were the biggest firms, which had their own systems, and the smallest ones which had no system.

While Revenue would work with smaller firms, the bigger companies would have to overhaul their own processes, he said, noting the tax authority would be testing payroll tax software in March ahead of the 2019 introduction.

On Brexit, Mr Cody said like everybody else he was still in the dark as to where the process was going, but Revenue was working under the assumption that the UK was exiting the European single market and customs union.

“A real challenge for Ireland is that 80 per cent of all imports and exports come either to or from Ireland through Britain.”

He said it was really important that the UK remained within the EU’s common transit arrangements, but identifying whether goods originated from Ireland or Britain when they arrived in mainland Europe remained to be worked out.

Mr Cody said Revenue estimated that there were about 12,000 businesses here that exported solely to the UK. “They’re going to go from exporting into the single market without customs procedures to facing exporting to a third country,” he said, noting most were SMEs.

He said about 60,000 businesses here imported goods and services from the UK. An area that would be particularly affected would be the integrated supply chains of big multiples, whose goods from the UK would become imports overnight.

1 Lockdown exit: How can Irish economy reopen without big health risks?
2 Finance ministers gather as fears grow even the future of the euro zone is at risk
3 Precipitous revenue slump, Deliveroo goes convenient; and data protction fears
4 Coronavirus: Property rental in the jaws of the epidemic
5 I want to change my will quickly in case I fall ill. Do I need a lawyer?
6 Aldi offers priority access for front-line workers at its Irish shops
7 Digital health platform SilverCloud Health raises €14.7m
8 We cannot afford to neglect supply chains when supporting business
9 Property market has not felt full impact of Covid-19, warns Sherry FitzGerald
10 Government announces €1bn in supports for businesses
Real news has value SUBSCRIBE