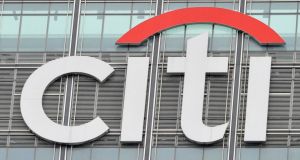 The bank produced a net loss of $6.7 billion in 2017, but this was triggered by a charge related to a cut in US corporate taxes. Photograph: PA Wire

Citigroup has handed its chief executive Michael Corbat a 48 per cent rise in his pay package to $23 million (€18.5 million) for 2017, a year in which the US bank increased operating profits but fell short of previously set financial goals.

On top of an annual cash bonus of $6.5 million and a base salary of $1.5 million, Mr Corbat was also given two batches of deferred incentives of $7.5 million each - one in stock awards and the other in performance share units. The deferred part of his package vests subject to performance over the next four years.

The bank produced a net loss of $6.7 billion in 2017, although this was triggered by a non-cash accounting charge related to the US corporate tax cut. Excluding that, adjusted earnings per share rose 13 per cent.

Citi last summer laid down new financial targets after it had trouble meeting previous ones.

The bank said in a filing: “In addition to Citi’s positive operating results, the [remuneration] committee considered market levels of pay for the CEO role at peer institutions and Citi’s significantly improved total shareholder returns.”

Citi employs about 2,500 people in Dublin.