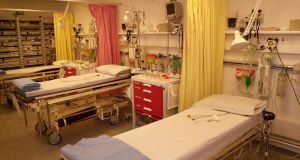 Proposed industrial action by health services support staff could affect 40 hospitals across the country, the trade union Siptu has said.

Siptu plans to ballot healthcare assistants, radiographers, home helps and other grades on a variety of pay issues in a fortnight.

The union is seeking access for up to 12,000 home helps and healthcare assistants to a job evaluation scheme and believes the outcome of this process will result in many staff being paid more.

Under such job evaluations, if a person’s role, workload or responsibility is found to have expanded, they could qualify for an upgrade involving a pay rise. However it is understood the Government is concerned the move could have significant financial implications .

Siptu members who work in hospital emergency departments are also seeking similar concessions to those obtained last year by the Irish Nurses and Midwives Organisation after it threatened industrial action. These included promotions, additional leave and a €1,500 education bursary.

The ballot of support staff is due to start on January 23rd and Siptu at the weekend set out details of the hospitals and health facilities concerned.

Siptu health division organiser Paul Bell said: “The failure of the HSE and Department of Health to resolve a number of issues has led to a situation where our members have been forced to contemplate strike action.

“These issues include a failure by management to adhere to the fully binding provisions of the Lansdowne Road agreement and Haddington Road agreement. The most crucial elements that have not be adhered to include to reintroduce a job evaluation scheme, to pay interns or apply incremental credit and double time payments.

“The other central issue in this dispute involves the granting of concessions by the HSE and the Department of Health to nurses working in emergency departments, which have not been extended to other workers.”

Mr Bell said there was ample time before the scheduled ballot on January 23rd for the HSE and Department of Health “to address all the outstanding issues of concern for our members, something they have failed to do over the preceding 15 months”.

It is understood that in a letter to Siptu last week the Minister for Health Simon Harris called for dialogue to resolve the outstanding issues.

Siptu said this week, however, that this had not “ led to any genuine action by either the HSE or Department of Health”.

The hospitals and health facilities where Siptu support staff members will be balloted are:

Our Lady of Lourdes Hospital, Drogheda