Banks sell $42bn of corporate debt issued so far this year, boosting stocks by up to 30% 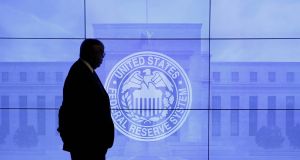 The uptick in debt trading volumes has reflected a broad market rebalance since the election of Donald Trump in November and interest rate rise by the Federal Reserve (above) in December. Photograph: Kevin Lamarque/Reuters

Banks have flooded the market with debt in the first days of the new year, propelling a record pace of bond sales as companies seek to lock in borrowing costs before interest rates rise further.

The sales have been met with ample investor appetite ahead of the fourth-quarter earnings season, when the majority of US banks are expected to report improved profitability.

Banks have sold $42 billion of the near $73 billion of corporate debt issued so far this year, including a $5.25 billion offering from Citigroup, a $5 billion deal by Barclays and a $4 billion sale from Credit Suisse, according to Dealogic. The issuance has bolstered overall activity at the start of the new year, with two of the 20 busiest corporate bond trading days on record set in the first three trading days of 2017.

Those expectations have favoured bank stocks, with shares of Bank of America and Goldman Sachs up more than 30 per cent and Morgan Stanley and JPMorgan rising more than 20 per cent since the election.

Higher bond trading volumes have boosted fixed-income businesses across Wall Street, while higher interest rates are expected to buoy the margins banks earn on loans to consumers and companies.

JPMorgan and Wells Fargo are among the groups to kick off the results season, with reports due before markets open on Friday.

Investors have shown a strong interest in the new debt sales, which have been dominated by European banks raising funds to meet regulatory requirements.

“The performance of the new issues has been strong and the impact on secondary market spreads has been muted,” said Hans Mikkelsen, a strategist with Bank of America Merrill Lynch. “It suggests the market is set up to absorb elevated amounts of issuance.”