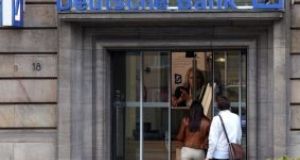 Deutsche Bank has agreed to pay $95 million (€89.9 million) to resolve a US government lawsuit accusing the German bank of tax fraud for using “insolvent” shell companies to hide significant tax liabilities from the Internal Revenue Service in 2000.

Under the accord described in papers filed late on Wednesday with the federal court in Manhattan, Deutsche Bank also admitted to trying to stick the shell companies with the tax bill for its then-new stake in drugmaker Bristol-Myers Squibb.

The settlement resolves a lawsuit filed in December 2014 that had sought to recoup more than $190 million in taxes, penalties and interest.

“The government, through this action and settlement, has made Deutsche Bank admit to its actions designed to avoid taxes,” US attorney Preet Bharara in Manhattan said in a statement.

Deutsche Bank spokeswoman Amanda Williams said in a statement: “We are pleased to resolve this claim and put these events from more than 16 years ago behind us.”

The settlement marks the latest step in Deutsche Bank’s bid to resolve legal matters that in recent months caused investors to worry about its future, and whether it had enough capital.

Last month, Deutsche Bank reached a $7.2 billion settlement in principle to resolve a US probe of its sale of toxic mortgage securities. The tax case arose from Deutsche Bank’s early 2000 acquisition of Charter, which had been sitting on a large unrealised gain in Bristol-Myers.

According to settlement papers, the bank in May 2000 sold Charter to the shell companies, which then liquidated Charter and sold the Bristol-Myers shares back to the bank, triggering a more than $52 million tax liability. But the shell companies lacked the funds to pay the taxes, and Deutsche Bank admitted that it knew or should have known this was the case, the papers said.

“Deutsche Bank engaged in the May 2000 transaction in order to avoid having to pay the built-in tax liability,” the papers said.