JP Morgan Chase poised to deliver a 7.58 per cent year on year increase in share value 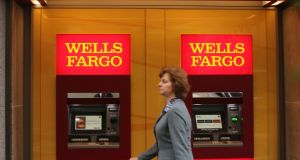 Wells Fargo & Co, the largest US mortgage lender, is expected to announce its fourth-quarter results before markets open this Friday. Photograph: Reuters/Robert Galbraith

Wells Fargo, Bank of America and JP Morgan Chase are all due to report quarterly earnings this Friday.

Last time the company reported, Wells Fargo & Company generated earnings per share of $1.03 and revenues of $22.33 billion, both which were higher than consensus estimates.

JP Morgan Chase is also reporting fourth quarter results, with analyst expecting the stock to deliver $1.42 in earnings per share, representing a 7.58 per cent year-on-year increase. Revenue for the quarter is expected to be $23.87 billion.