Nama to ‘resolve’ remaining ghost estates by end of 2017 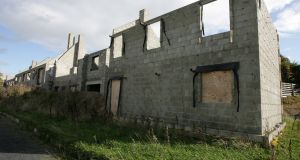 Nama expects to “resolve” the remaining 25 ghost housing estates in its portfolio by the close of this year.

In a year-end review published Thursday, the State agency said it had 332 unfinished housing estates on its books in 2010. This figure had fallen to 25 by the end of last year and it is “expected that these will be resolved during 2017”.

No details on how this might be achieved were provided.

This is significant for the Government as the senior debt is a contingent liability for the State and the exchequer would have to pick up the tab in the event of a shortfall.

The State agency, which was set up in 2009 to deal with toxic property loans held by the domestic banks, currently has €2.2 billion in cash on its books, according to an end of year review published on Thursday. Some €5.4 billion was generated in cash in 2016.

Nama said it generated “substantial profits” last year, but did not publish a precise figure. Industry commentators have estimated a profit of about €1.5 billion for last year.

The agency restated its view that it would generate a surplus of €2.3 billion for the State by the time of its planned wind-up in 2020.

Nama also plans to deliver 20,000 residential housing units by the end of 2020, mostly in Dublin. The agency said some 4,700 units had been completed by the end of 2016 by Nama debtors and receivers, while construction has begun on another 2,148 units.

In addition, 7,300 homes had received planning permission while applications had been lodged or would be lodged within 12 months for 11,000 units.