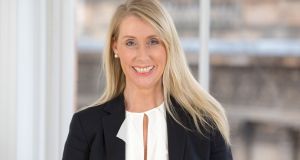 Debbie Crosbie: will become the only female chief executive of a major British bank when she joins TSB in 2019. Photograph: TSB/PA Wire

Britain’s TSB Bank, a subsidiary of Spain’s Sabadell, has hired Debbie Crosbie as chief executive to lead the bank’s efforts to recover from an IT meltdown set to cost more than €320 million.

Ms Crosbie replaces Paul Pester, who resigned in September after months of pressure over the botched IT system switch that locked nearly two million customers out of online banking services and led to a surge in accounts hit by fraud.

Ms Crosbie joins from banking group CYBG, where she has worked for more than 20 years, most recently as chief operating officer. She will become the only female chief executive of a major British bank when she joins TSB in 2019.

Executive chairman Richard Meddings will return to his non-executive chairman role when Ms Crosbie joins TSB. He told reporters Ms Crosbie’s appointment was “a big step” in the bank’s turnaround. He said the group had fixed most of its IT issues.

“By the end of this year we will have put [these IT problems] behind us,” he said. “I do believe we can look to the future to 2019 and beyond with real confidence.” – Reuters