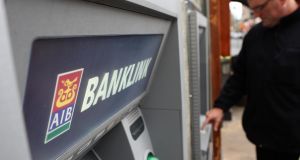 The State should clearly outline its plan to sell down its remaining stake in the Irish banking system, the chief executive of the National Treasury Management Agency has urged. Photograph: Peter Muhly/AFP/Getty Images

The State should clearly outline its plan to sell down its remaining stake in the Irish banking system, the chief executive of the National Treasury Management Agency has urged.

Conor O’Kelly warned that the dwindling share prices of Irish banks shouldn’t discourage the Government from selling its stake in the banks and using the returns to pay down debt.

“The idea we should wait until the bank shares get back to where we once sold them, or until we get all our money back – as if the market owes us something – is to introduce what’s known in behavioural economics, and the science, as optimism bias and ownership bias,” he said.

“The introduction of those biases lead to very poor decision-making,” Mr O’Kelly told a market engagement event run by the Irish Strategic Investment Fund (ISIF), which is managed and controlled by the NTMA.

The event heard that more than €1 billion has been generated in investment gains by ISIF since its inception in 2014. The fund’s Irish investment commitments have grown to €4.6 billion as it continues to shift its focus from international investments to Irish-focused companies.

Mr O’Kelly pointed out that AIB’s share price is currently trading about €2 below the €4.40 it was priced at when the Government sold a 28.75 per cent stake in the bank in 2017. However, he urged that a plan be outlined for further share sales, even at relatively lower prices.

“We have to take the emotion out of the decision, be rational. And rather like making our way down a debt mountain, we need a clear pathway to reduce the State’s shareholdings in the banks, use the proceeds to pay down debt, and get us closer to that base camp,” he said.

Mr O’Kelly said the last few years, particularly the globally low interest rate environment, had allowed Ireland to reduce the cost of its “debt mountain”. “As we stand here looking out past 2020 and into a new decade, the picture is very different and quite a bit clearer.”

The interest rate on Ireland’s still-significant debt pile is set to fall below 2 per cent – about half what it was five years ago – while the interest cost of that debt is projected to come under €4 billion a year, down from €7.5 billion a year over the same timeframe.

“We still have a mountain of debt, and there’s only one way to get down a mountain,” he said. “Very slowly and to stick to the path . . . we are much further down that mountain than we ever thought we would be at this stage. Not quite safe, not at base camp, but we can see it in the distance.”

Mr O’Kelly said important changes are taking place regarding Ireland’s relationship with the world, driven by several factors, including the US-China trade war, changes in Brussels and the general election earlier this year.

“Lenin once said sometimes for decades nothing happens, and in weeks, decades happen. It certainly feels as if the tectonic plates are shifting around Ireland’s key relationships and key partnerships around the world,” he said.