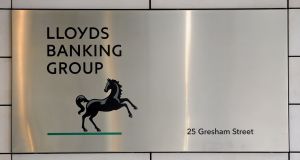 The plunge in profit, though in line with analyst expectations, showed Lloyds paying a toll for past misconduct while the rise in bad loans hinted at potential trouble ahead for Britain’s economy.

Lloyds is viewed as a bellwether for the British economy, given that it is the country’s largest provider of home loans and one of its biggest backers of businesses.

Chief executive Antonio Horta-Osorio remained upbeat despite the profit downturn, saying the economy remains “resilient”. Though there is uncertainty over Britain’s post-Brexit trading relationships, the country now has “a clear sense of direction”, he said.

Lloyds shares rose 3 per cent in early trade, outperforming the FTSE 350 banking index, which analysts attributed to more positive than expected guidance on the bank’s ability to build capital reserves.

It had said it will build capital at a rate of about 1.7 to 2 percentage points, a more positive forecast than expected.

The bank also announced a dividend of 3.37 pence per share, but the buyback some investors had hoped for was not forthcoming.

The total payout of £2.4 billion is well short of the £4 billion bonanza the previous year after cancellation of a planned £650 million share buyback once the full costs of PPI became apparent.

Staff have also paid a price for the bank’s past misconduct, with the lender cutting its bonus pool by a third to £310 million in recognition of the PPI mis-selling scandal and other misdeeds.

Mr Horta-Osorio and operations chief Juan Colombas asked to be excluded from the 2019 bonus scheme in recognition of the poor performance and misconduct, though they were still paid £4.7 million and £2.6 million respectively.

Lloyds said that other misconduct issues that hit its performance and staff bonus pool included its treatment of customers affected by fraud at its HBOS Reading branch. – Reuters