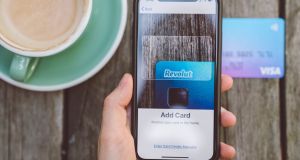 Revolut has over 500,000 customer in Ireland. Photograph: Getty Images

Fast-growing financial technology company Revolut, which has more than 500,000 customers in Ireland, has been valued at $5.5 billion (€5.1 billion) as a result of a new fundraising deal.

The still-unprofitable company, founded in London less than five years ago, has raised $500 million (€460 million) in new equity finance in the transaction, with California-based investor TCV leading those that committed new funds, it said in a statement. The fintech has raised a total of $836 million (€769 million) to date.

The digital challenger bank has more than 10 million customers globally and employs 2,000 people across 23 offices. It confirmed earlier this month that it plans to shift responsibility for its European payments from London to Dublin as a result of Brexit.

This will result in its Irish team, led by former Ulster Bank executive Joe Heneghan, expanding from 12 to between 40 and 50 people this year.

Founded in July 2015 by Nikolay Storonsky, Revolut offers a range of banking options, including a newly-launched, easy-access savings account. It intends to introduce new credit offerings shortly. These will be launched in Lithuania initially with no timelines at present for their introduction in other markets.

The new valuation marks a sharp increase from the $1.7 billion (€1.56 billion) that investors put on the business under a fundraising round in 2018. However, it is at the lower end of the $5 billion (€5.6 billion) to $10 billion (€9.2 billion) valuation that had been speculated by some media outlets late last year.

“We’re on a mission to build a global financial platform – a single app where our customers can manage all of their daily finances, and this investment demonstrates investor confidence in our business model,” Mr Storonsky said.

“Our focus is on rolling out banking operations in Europe, increasing the number of people who use Revolut as their daily account, and striving towards profitability.”