PTSB shares have slumped by 35% since the start of June 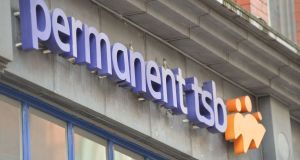 An arm of Wall Street investment bank Morgan Stanley has emerged as a 5 per cent stakeholder in Permanent TSB, following a 35 per cent slump in the Irish mortgage lender’s stock in the past nine weeks.

PTSB’s share decline was accelerated from July 26th, when the bank accompanied a solid set of earnings by reporting little progress on its non-performing loans during the first half of the year.

At 28 per cent of its total loan book, PTSB’s bad loans ratio is the highest among Irish banks.

Last week, PTSB suffered from two broker downgrades - from Investec and Davy in Dublin - amid fears that the group will have to sell NPL portfolios at discounted prices to help deal with its worst €2.7 billion of mortgages.

The European Central Bank has been upping the pressure this year on banks with high levels of NPLs across the euro zone to come up with credible plans to draw a line under the problem.

Morgan Stanley breached the 3 per cent level at which it is obliged to report a holding in an Irish publicly-quoted company last Thursday and had a 5.1 per cent stake at the end of that day, according to a stock exchange announcement on Tuesday.

The filing suggests that almost 1 percentage point of the shares were out on loan, most likely to short-sellers, while a further 1.65 per cent comprised equity swap derivatives.