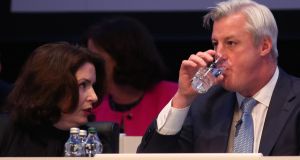 Bank of Ireland chairman Patrick Kennedy was forced to defend fellow directors for having low shareholdings in the bank, as some small investors criticised the board at its annual general meeting on Tuesday for having having little “skin in the game”.

Shareholders in the State’s largest retail bank by assets have suffered from a 30 per cent slump in its stock price in the past year, as sentiment towards the sector has been hit by concerns about Brexit, international trade tensions and concerns that the European Central Bank will hold its key rate at zero for longer than previously expected.

Bank of Ireland’s annual report shows that its 11 directors at the end of last year had a median holding of 1,639 shares, valued at less than €8,000 at the time. Mr Kennedy had by far the largest position, with 105,156 shares, while chief executive Francesca McDonagh held 2,000.

“You represent us, you need some skin in the game,” said one of two shareholders to raise concerns over the matter at the agm.

Mr Kennedy, presiding over his first agm since becoming chairman last August, said that while director shareholdings can be viewed “as being a measure of the commitment of the board, I can absolutely assure you” that this is not lacking. Three directors have spent almost €55,000 between them buying additional shares in the group so far this year.

The chairman assured shareholders that the group would “continue to generate capital at a rapid base” as it retains earnings, even as it pursued a policy of increasing its dividend payout over the coming years.

Bank of Ireland’s core Tier 1 capital ratio, a key gauge of its ability to withstand a shock loss, fell by 0.5 per cent over the course of 2018 and the first three months of this year, to 13.3 per cent. The group has a target of maintaining a ratio of more than 13 per cent.

Bank of Ireland paid its first dividend since the onset of the financial crisis last year and plans to make a 16 cent-a-share payout on its 2018 earnings. This equates to 30 per cent of what the company called “sustainable earnings”.

Mr Kennedy said the group remained committed to reaching a dividend payout ratio of about 50 per cent of sustainable profits over time.

The chairman also told shareholders that Bank of Ireland remained committed to reducing its non-performing loans in time to the European average, which lies at about 3.5 per cent.

Last month the lender shifted €375 million of restructured buy-to-let mortgages – which remain classified as non-performing loans – off its balance sheet through a bond refinancing deal, called securitisation. This has lowered the problem loans ratio to 5.8 per cent, the lowest level among Irish retail banks, from 6.3 per cent.

The company said in a trading update issued earlier this month that its total loan book rose €2.1 billion in the first three months of this year to €79.7 billion, helped as the value of sterling rallied, with underlying growth coming to €600 million. Bank of Ireland returned to loan book growth last year for the first time in a decade.

Bank of Ireland also announced on Tuesday that former National Treasury Management Agency executive Eileen Fitzpatrick would join the board as a non-executive director.

Nine more deaths among people diagnosed with Covid-19 in Ireland

1 Why is Germany suddenly embracing its inner Keynesian?
2 Aer Lingus confirms job cuts due to ‘decimation in demand’
3 Passengers face queuing in car parks at Dublin Airport
4 Major credit union plans to limit savings accounts to €40,000
5 Domestic economy may get boost from multinationals
6 Ikea among major retailers to reopen next week
7 Brother is dragging his heels as executor of uncle’s will - is there anything I can do?
8 Woodchester founder Craig McKinney dies
9 Prospect of foreign travel highlights remaining restrictions here
10 Tesla’s Elon Musk calls for breakup of Amazon in tweet
Real news has value SUBSCRIBE