Frank Murphy’s idea was brilliantly simple: enable people to pay in their own currency 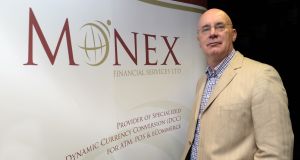 Frank Murphy: ‘The biggest challenge was people saying why didn’t someone think of this before? Where’s the catch?’

Sometimes good ideas can immediately catapult a company into the big leagues. More often, they will need some time to come to fruition.

As a college student in the 1980s, Frank Murphy was working for Boland’s car rentals at Shannon Airport, back when it was a compulsory stopover point. And he had an idea.

“At the time, the pound [punt] was in circulation here in Ireland and foreign visitors found currency conversion very confusing,” Murphy says. “They were concerned about the actual charges in their home currency. The solution seemed simple: allow visitors to pay in their own familiar currency, although at the time I didn’t know how I would make that happen.”

The idea stayed with him, though the means to make it happen emerged only slowly. Later, as the No 2 at finance and business solutions provider Fexco, Murphy brought his idea of dynamic currency conversion to the table. However, there it faltered.

“We fell apart over it,” he says. “We weren’t able to come to an agreement over it and so I decided to go and do it myself.”

As a result, Monex was born.

One of Murphy’s first steps in setting out on his own was to resurrect his links with car rental companies. By that point, Boland’s had become a Hertz franchise, so Murphy sat down with his friend Andrew Boland, discussed his idea of currency conversion, and ended up signing on Hertz as a customer.

It was a landmark moment for the nascent company, and Monex’s first dynamic currency conversion (DCC) transaction took place in 1996. Ryanair came on board in 2003; today it is the company’s biggest customer.

Conversion at its core

While Monex has moved into other services, dynamic currency conversion is still at the heart of its product offering. DCC is available in 46 countries , and is particularly strong in the Middle East, Asia and North America. Customers include Dublin Duty Free, Hertz, and an expanding ATM network portfolio of more than 68,000 machines.

Dynamic currency conversion tends to work better in countries where the currency is less familiar, Murphy notes. “The hit rates can be quite high.”

If you are on holidays outside the euro zone, withdraw money and are asked if you want the transaction recorded in euro rather than the local currency, chance are Monex’s technology is behind the request.

Monex shares the margins on the transaction with the merchant or ATM operator. Whether or not it’s a good deal for the consumer will likely depend on the exchange rates offered by the ATM operator.

Monex operates client support centres in Europe, the United Arab Emirates, the US and Asia. It employes 120 people wordwide, with 55 based in Killarney. Turnover is expected to hit €100 million in 2016, with processed transactions worth some €35 billion.

Needless to say, leaving an established player such as Fexco to go out on his own was not without challenges.

“I was scared going out on my own,” Murphy says. “The kids were about four and five at that time, and the first five or six years were very tough. I wouldn’t go through it again. It takes a lot to get a business off the ground.”

Did he ever consider pulling the plug?

“There would have been tough weeks, but I never thought about throwing in the towel,” he says. “Well, I had panic attacks the odd time, but, overall, I knew the future was going to be there. It was about remaining calm and waiting for it to happen. I always believed it would work or I wouldn’t have done it.”

Ironically, the very simplicity of the idea – enabling people to get the price of a good or service, or withdraw cash from an ATM, in their own currency – was a significant hurdle.

“The biggest challenge, I think, was people saying why didn’t someone think of this before? Where’s the catch? We had to get over that juncture.”

In those early days, Monex was funded from Murphy own resources, with some investment from friends, which meant he was largely dependent on that first contract to get funds into the business.

“Unfortunately, banks wouldn’t support me, so I had to it do from internal resources,” he says, though Enterprise Ireland also helped out in the beginning.

“Once we were cash-positive, we began to buy back equity,” he says. For start-ups, giving away equity in the early days can be a necessity: “You have to do what you have to do to get started.”

Building the business came with a personal cost as well. “You don’t grow a business without some sort of emotional cost,” Murphy says. Indeed, running an international business from Killarney required spending a lot of time on the road.

“Killarney is not the best place for an international business, but it was home for us,” he says. “We weren’t going to move as were very happy in Killarney.

“I used to burn up a passport every two years. I’d have three passports on the go. You’ve got to like airports or you shouldn’t be in this job.”

Murphy missed plenty of birthdays and matches during the years (“you do try and get home every weekend, but it’s impossible if you’re in Australia”). He did manage to take chunks of the summers off: “Summers were sacrosanct.”

Despite the global financial downturn, Monex motored ahead, growing turnover by about 10 per cent from 2012 to 2015.

“The downturn was good for us,” he says, “because companies were looking for extra margin. It wasn’t a blessing in disguise, but it made things a bit easier.”

There may be still further challenges ahead. Monex operates in an innovative marketplace that has undergone a rapid pace of change in recent years with the advent of mobile payments such as Apple Pay. There is also competition from so-called contactless payments, which allow consumers to simply flash their cards rather than input a pin.

Fexco now also operates dynamic currency conversion services, as does Australia’s Travelex and Switzerland’s Global Blue. So where does Monex fit into this new digital world?

Murphy says he’s not too concerned. He notes that Monex’s products interface with credit cards – and Visa and Mastercard are behind payment tools such as Apple Pay.

“Cash will be minimised, but it will always there for our lifetime,” Murphy says. Monex is now talking to credit card providers about giving customers the option to purchase in their own currency on contactless as well as contact payments.

Murphy says growth in 2016 will again be in the order of double digits, and he is still keen to expand Monex’s global footprint. So he’s not retiring his passport just yet: “There are lots of parts of the world we’re not in; every part of the world is a target.”

Monex is seeing increased demand for tokenisation and encryption services to facilitate secure online transactions both for merchants and their global customer base.

Cash will also drive growth as Monex looks to expand its ATM portfolio, which already includes some 68,000 machines.

But now that the company has hit the €100 million mark, what’s next? Could a sale be on the cards?

The 2012 sale of Fintrax (a Galway-based specialist financial services company also founded by a former Fexco executive, Gerry Barry) put the industry into the spotlight, and Monex was approached by interested buyers. In 2014, UK banking giant Lloyds was said to be in the frame for a 25 per cent stake.

“None of them fitted what we were looking for,” says Murphy. He adds that, with plenty of cash in its coffers, Monex is happy to go it alone for now. “Our end goal is to make us one of the biggest companies in the world.”

To do this, of course, further investment will likely be required, and a possible flotation could be on the cards at some point.

“Going public has been considered,” concedes Murphy, “I’ve always had a hidden ambition to do something big. But at this point in time, we’re doing fine as we are.”

Family: Married to Dr Teresa McSweeney, a GP. They have two children.

Something about him you would expect: Murphy says remaining innovative and open to diversification is a key factor when building a global business. “Never be afraid to take a chance!”

Something about him that might surprise: When he’s not suited and booted as Monex boss, Murphy is equally happy in his overalls and wellies down on Glen South Farm, which he and his wife took over in 2012. They now run the first robotic beef farm in Europe, with a herd of some 450 Angus, Hereford and mixed breed cattle.