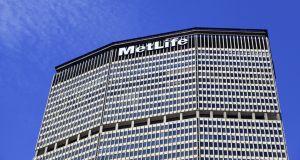 MetLife’s New York headquarters. While MetLife would not comment on the redundancy plans, it was keen to highlight its commitment to the Republic. Photograph: iStock

US life assurance group MetLife plans to cut the size of its Dublin workforce by at least 55 staff, or about 18 per cent.

Dublin is the base for MetLife’s European operations, which include branches across the continent. It is believed that at least 55 voluntary redundancies are being sought from the division and that the restructuring will lead to jobs moving to both India and Poland. It is also thought that the number of staff set to be cut could considerably exceed 55.

While MetLife would not comment on the redundancy plans, it was keen to highlight its commitment to the Republic given that it recently extended its lease on its Hatch Street office in Dublin by nine years.

“As our European hub, MetLife remains committed to Ireland as a great place to do business,” a spokesman said, noting the recent opening of its global technology operations hub in Galway at which it plans to employ up to 200 staff.

“MetLife continually seeks ways to ensure it is operating efficiently and effectively in order to best meet our customers’ evolving needs; however, we do not have any announcements to make.

“As always, our priority is to ensure our colleagues are informed of any changes first,” the spokesman added.

MetLife established its Dublin operations in 2006 with 10 employees to oversee the provision of life and non-life insurance products in markets across Europe, with supporting functions including actuarial, finance, compliance, risk, legal and other support and management functions.

Its new Galway campus is aimed at creating solutions for the New York group that can be rapidly scaled to markets around the world, the company said in a statement at the time of the announcement.

In August 2018, MetLife’s Dublin landlord Davy flagged that the company had agreed to pay rent in excess of €50 per sq ft for the five floors it occupies in the building.

While MetLife did not expand on its redundancy plans, The Irish Times understands that they will be voluntary and that the company has no further plans to reduce the size of its workforce.