Media executives and journalists to appear before banking inquiry 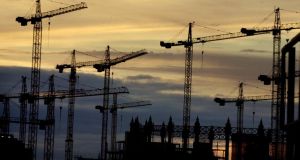 A number of current and former media executives will appear before the Oireachtas Banking Inquiry later this month as it continues its investigation into the collapse of the financial sector here in late 2008 and its subsequent rescue by the State.

This module of the inquiry will focus on the role of media during the property boom in the lead up to the banking crisis between 2002 and 2007 and any changes in approach after the crisis.

Editors appearing before the inquiry will be asked to address editorial policy on the economy and the property market between 2002 and 2007, the paper’s approach to reporting on the property market and the contribution of the media to public understanding and debate around fiscal/budgetary policies and their implications.

Managing directors of the media in that period will focus on the business model and sources of revenue of their organisations, including from the property sector, and its importance in the overall revenue mix. It is anticipated that they will also address the media groups’ engagement in property related commercial activity and and in house relationship between the editorial and sales sides of the business.

The inquiry will also talk to a number of journalists to tease out how the property and banking sectors interacted with government and politicians ahead of the financial crisis, and what controls existed to regulate such relationships.

They will also try to assess whether Ireland being a “small country” was a factor in the nature of the interaction between different players.

The sessions with media will run on March 25th and 26th. Academic Julien Mercille, a lecturer at UCD whose research includes media studies, and American journalist Harry Browne will appear the first day followed by Tim Vaughan, who has been editor of the Irish Examiner newspaper since before the economy here crashed almost seven years ago.

Gerry O’Regan, a former editor of the Irish Independent, and Michael Doorley, who has worked with Independent News & Media since 2009 and is its current company secretary, will appear first on the morning of March 26th.

Ms Kennedy and Ms Donovan are expected to appear together before the committee, which is chaired by Ciarán Lynch of the Labour Party.

Ms Kennedy retired as editor of this newspaper in 2011 after nine years in the role while Ms Donovan stepped down as managing director in 2010 having led the company’s commercial operations for more than eight years.

In the afternoon, the committee will hear from Ed Mulhall, who resigned as managing director of news and current affairs at RTÉ in 2012, and Paul Mulligan, who has been head of operations at RTÉ since 2009.

It is understood that Socialist Party TD Joe Higgins has pressed for this module of the inquiry to be included in its schedule.

Other journalists are set to appear before the committee this month, although not as part of the media module. This includes Simon Carswell, the Washington DC correspondent of The Irish Times who reported extensively on the banking crisis.

He will appear on March 10th to discuss the relationships between State authorities, political parties, elected representatives, supervisory authorities, banking institutions and the property sector.

On March 12th, Frank McDonald, who recently retired as environment editor of The Irish Times, and academic and journalist Elaine Byrne will appear before the 10-person committee.