Mayfair hedge fund ramps up stake in IFG to 12.4% ahead of takeover 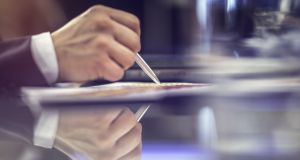 While shares in IFG surged by 43 per cent on the day the company announced the deal, subject to shareholder approval, they have traded at a 2.25 pence discount to the £1.93 planned takeover price

A UK hedge fund has built up a 12.4 per cent interest in Dublin-listed IFG Group as it takes advantage of the financial services firm trading at a discount to the price at which it has agreed to be taken over for £206 million (€238.3 million).

Sand Grove Capital Management, based in the Mayfair in London, disclosed on March 26th that it had snapped up a 6.2 per cent stake in IFG through financial derivatives called contracts for difference the previous day, after it emerged the company had accepted a takeover offer.

The hedge fund said on Thursday that its exposure has since doubled in size to 12.4 per cent, giving it the biggest economic interest in the market in the deal. The cheapest share price at which it bought CFDs in IFG was £1.885, a 2.4 per cent discount to the price at which the company has agreed to sell itself to UK private equity firm Epiris.

While shares in IFG surged by 43 per cent on the day the company announced the deal, subject to shareholder approval, they have traded at a 2.25 pence discount to the £1.93 planned takeover price.

CFDs are financial contracts that allow investors to place a bet on a stock for an initial outlay of as little as 5-10 per cent of the share’s value, similar to a homeowner buying a house with a small deposit and borrowing the remainder.

Sand Grove is a so-called “event driven hedge fund” that seeks to make a profit from corporate events, such as mergers and acquisitions. Merger arbitrage exploits the fact that shares often trade in the market at a discount to an agreed takeover price, reflecting the fact that the deal may have execution risk.

Vote on the takeover

IFG shareholders are due to vote on the takeover at an extraordinary general meeting on May 9th. A takeover would draw to a close a difficult 12 months for the company. During this time, its shares dropped 28 per cent, mainly as a result of it incurring significant legal and remediation costs linked to a UK revenue investigation into Elysian Fuels, a structure investment in biofuel businesses it initiated between 2011 and 2015.