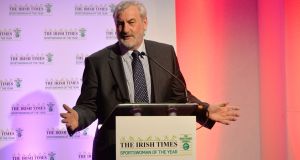 Staff at Ulster Bank in the Republic are in line for an average 2 per cent pay increase from April following a recommendation from independent mediator Kieran Mulvey.

Mr Mulvey has also recommended an average increase of 2.5 per cent at Ulster Bank in the North.

However, the bank and the Financial Services Union remain at odds on a plan to change salary ranges in the Republic.

Mr Mulvey acknowledged that the issue “remains contentious” and called for further engagement between the parties.

He asked that the proposed new reference salaries and ranges be published to staff for information purposes. It is understood that the bank plans to put the revised salary ranges into effect immediately, putting it on a collision course with the FSU.

The FSU will ballot members on the pay recommendation next week.

FSU senior official Gareth Murphy called on Ulster Bank not to implement the new salary ranges in the absence of an agreement.

A spokeswoman for Ulster Bank said “rewarding and motivating” staff was important to the bank.

“In line with Ulster Bank’s commitment to paying people fairly and recognising each individual’s contribution toward making the bank stronger and more sustainable, this deal will see pay increases for staff in 2017 with a focus on those at the middle and lower end of our salary ranges.

“In addition, Ulster Bank will also make changes to the salary ranges which come into effect immediately for new staff, and where beneficial for the purposes of pay reviews. For other staff it will be 2019 before these changes impact for pay reviews.”

FSU general secretary Larry Broderick noted that Ulster Bank had completed a strategic review of its operations in the Republic and wants to enter discussions on its future plans.

“This is likely to present a challenging agenda for staff and customers. Against that background, I would expect the bank to avoid unilateral action by imposing new ranges, not recommended by Mr Mulvey,” he said.

1 Lockdown exit: How can Irish economy reopen without big health risks?
2 Finance ministers gather as fears grow even the future of the euro zone is at risk
3 Property market has not felt full impact of Covid-19, warns Sherry FitzGerald
4 I want to change my will quickly in case I fall ill. Do I need a lawyer?
5 Coronavirus: How Covid-19 may reshape the Irish retail landscape
6 Coronavirus: Property rental in the jaws of the epidemic
7 Government announces €1bn in supports for businesses
8 Toast believed to have cut its Dublin staff by 50%
9 Tesco says coronavirus costs could reach €1bn
10 Iseq 20 companies lose €34bn in value due to pandemic
Real news has value SUBSCRIBE