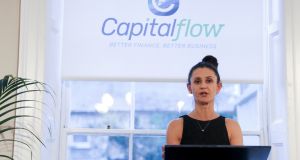 Pollen Street Capital managing partner Lindsey McMurray: “We have invested about €150 million in equity capital and another €700 million in debt financing so far but we’re just getting going in Ireland.” Photograph: Maxwells Dublin

British venture capital group Pollen Street Capital, which has invested about €1 billion in the Republic since 2016, has said it expects to make further acquisitions this year.

Speaking as the company confirmed the completion of a deal to acquire two Irish-focused businesses, managing partner Lindsey McMurray said the group was eying other opportunities in the local market.

“We have invested about €150 million in equity capital and another €700 million in debt financing so far but we’re just getting going in Ireland,” she told The Irish Times.

“We continue to look for more opportunities to invest and are optimistic that we can find additional high-growth businesses in the Irish market,” she added.

Ms McMurray, who was in Dublin this week for the opening of portfolio company Capitalflow’s new offices, confirmed the company had recently made a double-acquisition – buying Underwriting Exchange and its sister company, London Ireland Market Exchange (Lime), for an undisclosed sum.

Pollen Street entered the Irish market just under three years ago with its acquisition of specialist lender Capitalflow, a company which this week announced plans to lend an additional €300 million to SMEs during the year.

The group also has majority stakes in software company Vision Blue Solutions and in online auction house Bid X1, while its credit lending arm, P2P Global Investments, has advanced over €300 million of facilities to Irish property developers through Castlehaven Finance.

Pollen, which has over £2.7 billion (€3 billion) gross of assets under management, was formerly the private equity business of Royal Bank of Scotland.

Established in 2013, the group is focused on what Ms McMurray described as “fast-growing specialist companies that go beyond offering ‘vanilla’ products”.

She said its forays into the Irish market had exceeded expectations, adding that it had been looking at entering the market prior to Brexit.

“What we’re doing in Ireland is what we’ve already done to a degree in the UK and other countries. But there are definitely a depth of opportunities that we hadn’t foreseen,” Ms McMurray said.

In addition to its expansion in the Republic, the company has also been growing in Poland, where it recently acquired a majority stake in BIK, a Gdansk-based insurance services provider.

Underwriting Exchange and its sister company, which are both focused on the broking of specialist risk in the Irish market, are to be merged with the Miles Smith Insurance Group, a London-headquartered company acquired by Pollen in late 2017. The combined entity will control premiums in excess of £300 million (€343 million).

1 What is Covid Tracker Ireland? The HSE’s new app explained
2 British holiday home rental company exits Irish market
3 Ireland’s economy forecast to shrink 8.5% due to Covid-19 pandemic
4 Will family’s tax debt stop me getting my inheritance?
5 TikTok to quit Hong Kong mobile market ‘within days’
6 Why gift a son now if it eats into his tax-free inheritance threshold?
7 How to save money while helping to save the planet
8 Poverty could afflict more than one-in-five children in State by year end
9 Central Bank governor to call for ‘credible’ path’ to cut State debt post-Covid-19
10 State-owned DAA may have to contribute to bailing out Dusseldorf airport
Real news has value SUBSCRIBE