We could be looking at ‘hard Brexit’: But what does it mean?

Downing Street braced for a hit on sterling but what should Ireland worry about? 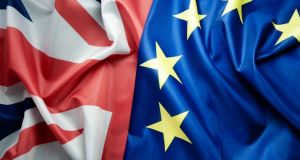 A “global Britain” may be forced to leave the European customs union. (Photograph: The Irish Times)

British prime minister Theresa May is to give a major speech on Brexit on Tuesday. Weekend leaks to the British press suggest that she will point to the likelihood of a “hard Brexit,” involving Britain cutting a lot of its existing ties with the EU.

Because Britain wants to control immigration from other EU countries, and escape the jurisdiction of the European Court of Justice, it has looked likely for some time that it would leave the EU single market, a cornerstone of the EU which allows the free movement of goods, services, capital and people.

Britain may also leave the customs union – though its approach here is still not clear and some cabinet members reportedly want to retain membership. The customs union sets common rules for goods coming in from outside the EU and thus promotes the free flow of goods within the single market without customs borders.

Britain wants to strike new trade deals with other countries - May’s speech will apparently refer to a “global Britain” .This may force it to also leave the customs union, as all members of such a union must have the same deals with third countries. However some official sources are quoted this weekend saying that Britain may not want to leave the customs unions entirely. It is not clear what this means.

One thing to watch in the days ahead will be the trend in sterling. Weekend reports said that Downing Street was braced for a hit on the currency as the hard Brexit rhetoric is stepped up. This could make life harder for Irish exporters, who have got some relief as sterling has clawed back some of the losses made after the Brexit vote.

Here are what the key issues mean for Ireland:

–The Single Market and Customs Union: Britain looks increasingly likely to leave the single market. This raises questions about the future of the common travel area between Ireland and Britain – and the freedom for Irish people to work in Britain and visa versa. If Britain wants to control immigration from the rest of the EU, will it maintain special arrangements with Ireland? And how will it control people moving through Ireland to Britain from other EU member states?

If Britain also leaves the customs union it also means some kind of control on the flow of goods through the Irish Border would be inevitable, though indications are that attempts will be made to continue the free flow of people across the Border. Will this means cars will travel freely but there will be queues of lorriers? Sources in Dublin say technology may allow the flow of goods to be monitored without physical checks on all lorries at the Border, though how this will all work is not yet clear.

Indications of a “ hard” Brexit also raise questions about the long-term trading arrangements between the two countries. If Britain leaves the single market and customs union, then new trading arrangements will have to be negotiated. This raises uncertainty about the future trading rules that will apply to Irish exporters to the UK and to UK exporters to Ireland, as well as between Britain and other EU countries.Typically tariffs – special imports taxes – apply on trade between countries that are not part of a free trade area.

–Transitional deal: One interesting part of the reports this weekend is an apparent acceptance in London that a transitional deal may be needed to cover the period after Britain leaves the EU, but before a new trade deal between Britain and the EU is negotiated. May’s government had said it believed the two sets of negotiations could conclude at the same time.

However, most observers feel a new trade deal with the EU will take much longer to negotiate than Britain’s exit terms. If there were no transitional deal, then after Britain left the EU, tariffs and non-tariff barriers would be likely to be immediately applied on trade between the EU and UK.

If the transitional deal allowed current arrangements to more or less continue for a period this would be very much to Ireland’s advantage. However, politically it is not clear whether this will be possible for Britain or the EU.

–The future shape of the British economy: Philip Hammond, the chancellor of the exchequer, said in an interview with German paper Die Welt that if Britain did not get access to EU markets after Brexit, it would consider cutting tax to boost its competitiveness. This is seen as a sign that Britain would cut its corporation tax further to attract inward investment. At the moment Britain’s corporation tax rate is 20 per cent and it is due to fall to 17 per cent by 2020. Any further reduction would erode Ireland’s advantage in offering a 12.5 per cent corporation tax rate – though of course companies locating in Britain would not have automatic access to the EU market, post Brexit.