Ireland must not play the UK off against the EU 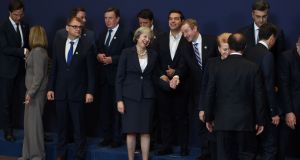 Anniversaries are times to reflect and to look forward. Sixty-three years ago last Thursday, The Irish Times reported on the foundation of the Irish Council of the European Movement and 45 years ago this month Ireland, the United Kingdom and Denmark signed treaties of accession to the EEC.

Following the UK decision to leave the EU, 28 countries now have to work out what this means for them and where they go from here. We know instinctively that the EU will be different without the UK.

The country’s departure will change the bloc’s future direction and this will not always be comfortable for Ireland.

We identified with many UK positions and were happy to support a large member state championing the need for EU reform.

Now there will inevitably be a shift to a more “continental” view of the EU. All countries, especially the smaller ones, will need to reflect on the implications of deeper economic integration.

Understandably so far the debate in Ireland following the UK vote has focused mostly on the terms of the UK exit. But a wider debate is needed.

Already there are voices hinting that Ireland should follow the UK and leave the EU. I profoundly disagree.

A small country like ours can have very little influence in shaping developments that affect us if we are not part of a bigger bloc.

In the EU, small countries have an important voice and a seat at the decision-making table.

If Ireland flirted with leaving the EU we would de facto return to a situation where the UK would determine a large part of our future. Is that what we want?

With the UK departure Irish people will want to make their own assessment of what EU membership brings and of its value to them.

We need an informed debate, so that people are involved and engaged and we need to make a new commitment to EU membership, reflecting a conscious choice that this is the best place for us in the turbulent 21st century.

Ireland in 2017 is a very different country to the one that joined the EEC in 1973. We have benefited hugely from the EU.

Our trade is more diverse, we have known how to benefit from open markets and we have been smart in capitalising on the wider energy, research and education networks that the EU offers.

Today’s Ireland is confident about our abilities and wants to punch above our weight in shaping international developments.

Because we know it so well today we are more critical of the EU. Some of that criticism is well placed as the EU clearly needs reform in some areas. For example, the EU is often criticised for being slow and cumbersome.

It is true that all important EU decisions involve long and tedious negotiations – because, contrary to populist belief, the EU cannot impose decisions on its members without their agreement.

No one can get everything they want all the time, not even the biggest member states, and this is an important safeguard for the smaller countries.

We are all used to making compromises in our families, in our sports or book clubs. We do it because the overall value of belonging outweighs the give and take that is needed to make the family or club run smoothly.

We need to see the EU in a similar light. And we need to deepen our involvement at all levels. The EU is not about “them and us”. It is “us”.

Our ministers, MEPs, farmers, business people and NGOs are all part of the EU decision-making process.

If we don’t like the way policies are developing we have to make the argument for changing them and win others around to our way of thinking.

I see three big challenges ahead of us. The first is to help the EU and the UK negotiate a smooth withdrawal and a reasonable, well-grounded future relationship. We need to start by being clear about what we want.

The second is to invest now in developing and advocating our view on the future direction of the EU.

We will need to spend time and energy in close networking with other, smaller member states, many of whom are like-minded on key issues. There is a role for Ireland here – if we want to play it.

The third big challenge is to reconfirm our commitment to the EU. After more than four decades of membership we are no longer starry-eyed but able to make an informed and mature assessment that it is still the best option for modern Ireland.

Many of the Leave voters in the UK were pining for a return to the past. That is not the right path for Ireland.

The EU is not perfect but in our much-troubled world it still shines as a beacon of respect for individual rights and equality, and as a zone of stability and prosperity, caring for the environment. It is an organisation where small countries can play a big role.

We need to make a conscious choice, just as in 1973, to see our future inside a reshaped EU and to be a full and active member, ready to criticise where needed but with no doubt about where our future belongs.