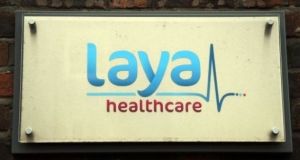 The insurer last week announced price hikes of almost 3 per cent from the start of next year.

Insurer Laya Healthcare paid out dividends of €20 million last year to its parent group AIG after reporting an €8.2 million rise in pretax profits to €28.7 million.

The company attributed the rise in profits to increased customer numbers and a curtailment gain of €4.1 million linked to the closure of its defined benefits pension scheme.

Employee numbers at the insurer rose to 560 from 531, with staff-related costs, including wages and salaries, rising to €47.3 million from €29.9 million, predominantly because of the ending of the pension scheme.

Laya is the country’s second largest health insurer. First established as Bupa Ireland, the Laya brand was launched in May 2012 following a management buyout of the then Quinn Healthcare.

AIG acquired the insurer in deal valued at about €80 million in 2015. In recent years, the company has expanded its product offering to include life insurance, travel insurance, and health and wellbeing programmes.

During 2019, Laya announced a major multimillion-euro plan to create a nationwide network of health and wellbeing clinics, in what was seen as a belated response to VHI’s decision to restrict access to its Swiftcare clinics to all but its own members two years ago.

The insurer last week announced price hikes of almost 3 per cent from the start of next year despite a fall in the level of claims during the Covid crisis. It said the average price increase would add about €35 onto each policy, meaning a family of four could end up paying more than €100 extra in 2021 when compared with this year.