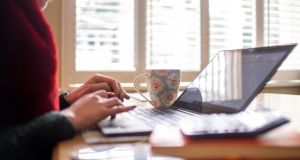 Nearly 90 per cent of the survey’s respondents said they believed remote working is here to stay, saying at least 30 per cent of their staff would work remotely in the future. Photograph: PA Wire

More than a third of insurance firms are worried about the cost of claims, particularly from Covid-19, while 60 per cent fear they will see a reduction in premium volumes as a result of the economic fallout from the crisis.

That is according to a PwC/Insurance Ireland CEO survey. It found that 35 per cent of firms in the sector here were anxious about claim costs, up from 16 per cent last year.

This was a high number given half the firms in the survey were in the life assurance side of the business and therefore not directly affected by rising claims due to the pandemic.

The survey found just under two-thirds were concerned by a possible deterioration in premium volumes due to the current economic crisis, while a similar number expressed concern about the impact of low interest rates on their investments.

Seven out of 10 (71 per cent) insurance chief executives said they were confident about growth prospects for their organisations in the year ahead, down from 83 per cent two years ago.

Nearly two-thirds (62 per cent) expect revenue growth in the year ahead, with a quarter stating this will be in excess of 10 per cent.

At the same time over one fifth (22 per cent) expect revenues to decline in the year ahead.

“Survey respondents’ confidence about the future underlines many insurers’ belief in their resilience and ability to deal with the disruption notwithstanding the health, economic and political uncertainties,” said John O’Leary from PwC Ireland.

“However, there are many challenges, including concern over the cost of claims, which has spiked to 35 per cent from 16 per cent last year, and the low/negative interest rate environment.

“These, coupled with the implications of Covid-19 for the broader economy, have dented some insurance leaders’ confidence,” he said.

Seven out of 10 (70 per cent) respondents confirmed that their organisations were currently experiencing skills challenges, mostly around actuarial, digital/technology, risk and underwriting capabilities.

Nearly 90 per cent said they believed remote working was here to stay, stating that at least 30 per cent of their staff would work remotely in the future.

Almost two-thirds (65 per cent) say that the insurance industry has not sufficiently responded to changing consumer habits and modern means of engagement, while 41 per cent are of the view that automation will result in a net decrease in their organisation’s workforce in the next five years.