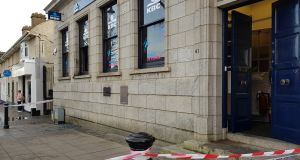 Arson attack took place at the KBC bank premises on the Main Street in Swords at 5.18am.

The move follows what staff say is a refusal by local management to engage with labour representatives in the wake of attacks after the eviction of two brothers and a sister from a Roscommon house and farm in Strokestown, Co Roscommon.

Gardaí are investigating arson attacks on KBC premises in Ireland last month, including its Dublin head office on Sandwith Street and branches in Swords and Dundrum. The lender has about 1,000 staff in Ireland and 16 branches.

Mr Murphy said that the chief executive’s lack of response to both letters was “very disappointing and very disrespectful to staff”.

“We’re raising legitimate concerns that need to be addressed,” he said, adding that the FSU has since written to KBC’s influential European Works Council in Brussels, which is made up of employee representatives and engages directly with management.

The recent attacks followed a controversial eviction on December 12th of farmer Michael Anthony McGann and two siblings from a house near Strokestown on foot of an order of possession that KBC had been granted by the High Court last August in relation to a loan of more than €300,000.

Public controversy surrounding the handling of the eviction has prompted Minister for Justice Charlie Flanagan to take steps to tighten the regulation of private security companies employed by banks and financial institutions to repossess property.

Mr Flanagan said he wanted to pass legislation this year to close a “gap” in the law that means private security workers executing court orders do not have to be registered with the independent Private Security Authority.

Mr Flanagan also said he wanted “only persons of suitable character” employed by private security firms. “In other words, no criminal convictions,” he said.

A spokesman for KBC Bank Ireland declined to comment on the FSU’s complaints, while spokespeople for KBC Group in Belgium didn’t respond to a request for comment.

Mr Murphy said officials on the European Works Council had responded that they were concerned and would be taking the matter up directly with management at the Belgian parent group.

The repossession in Strokestown had followed lengthy legal action. The bank originally lodged proceedings against Mr McGann in July 2009 as it sought repayment.

On Sunday, December 16th, a group of about 20 men stormed the house and attacked security workers guarding the property and burned their vans and cars. A dog was also fatally injured.

The McCanns have since moved back into the property and issued a statement saying that they “condemn all forms of violence”.

A 54-year-old man was arrested on Thursday as part of the Garda investigation into the attack.

Brussels-based KBC Group injected €1.4 billion into KBC Bank Ireland during the financial crisis as its bad loans soared. It reaffirmed its commitment to Ireland in February 2017, ending years of speculation about its commitment to the market.

Representatives from KBC Bank Ireland met with TDs Mattie McGrath, Michael Collins and Carol Nolan on Wednesday afternoon over how it deals with mortgage customers who are in trouble. Sources familiar with the discussions have denied reports that the bank committed to taking a different approach to repossessions cases in light of the Roscommon case.