Ulster Bank has returned €3 billion to Royal Bank of Scotland 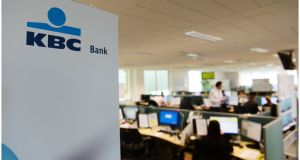 KBC Bank Ireland paid a €220 million dividend to its Belgian parent last year, according to its chief executive, as the lender began repaying its €1.4 billion bailout during the financial crisis.

The head of the Dublin-based bank, Wim Verbraeken, made the comments in response to questions from lawmakers at an appearance before the Oireachtas finance committee on Tuesday. He said that the unit made a follow-up dividend payment to its parent last month, but declined to outline the amount.

KBC Group in Brussels affirmed its commitment to the Irish market in February last year, ending years of speculation about its future after a slew of other overseas lenders, including Lloyds Banking Group, Danske Bank and Rabobank Group, retrenched from the Republic as bad loans surged in the wake of Europe’s biggest property crash.

“There is absolutely no pressure to return shareholder funds,” Mr Verbraeken said, adding that the wider group has also invested in the Republic in the past five years to build out its retail business.

Ulster Bank, the other remaining foreign-owned retail bank here, has returned €3 billion in special dividends to its parent, Royal Bank of Scotland (RBS), since late 2016. Ulster Bank required £15 billion (€17 billion) of capital injections from RBS during the crisis, the equivalent of a third of the bailout the group received from the UK government.

KBC Bank Ireland was the last of the country’s five remaining mortgage lenders to appear before the Oireachtas committee in the space of five weeks, with much of the hearings focused on the industry-wide tracker mortgage crisis.

KBC Bank Ireland executives said that 80 per cent of the €120.3 million of provisions they had put aside by the end of the last year to deal with the scandal were earmarked for refunds and compensation.

The bank, which had been among the industry laggards in identifying the extent of the problem last year, told the committee that its number of impacted cases has fallen from 2,974 in March to 2,754.

Mr Verbraeken said that KBC Bank Ireland is “in the process of evaluating various options” as it seeks to lower its 37 per cent ratio of non-performing loans (NPLs), equating to a value of €4.5 billion.

Oireachtas finance committee members have taken these comments as a strong hint that the group may join others - including AIB and Permanent TSB - in selling portfolios of problem loans as European regulators press lenders with high levels of NPLs to lower their ratios to the current 5 per cent European Union average.