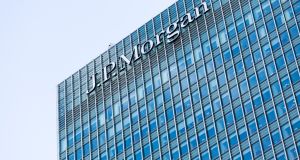 The Irish unit of US banking giant JP Morgan saw its net profit more than double last year to $16.5 million (€14 million) as the business, focused on back-office support services for international funds, saw a rise in fees from assets under custody and group transactions.

The company took a $6.9 million hit in 2018 on a lease on its previous Dublin office, as the company moved location, and this wasn’t repeated, which helped boost results.

Other fees climbed to $121.6 million from $108.1 million, as a result of an increase in revenues earned from other companies within the wider JP Morgan group.

In late 2018, JP Morgan left its old Irish accommodation, a rented five-storey building at 1 George’s Dock, and moved further down the quays to 200 Capital Dock, which was jointly developed by Nama and Kennedy Wilson. The move created capacity that would allow JP Morgan to almost double its Irish staff to 1,000 people.

The bank agreed to purchase the new 200 Capital Dock building from the developers on a forward funding deal while it was still being built in 2017.

The 2018 accounts for JP Morgan Bank (Ireland), which can trace its roots to 1926, revealed the value of that transaction was about $156 million.

Meanwhile, it emerged last month that JP Morgan is transferring about €200 billion of assets from the UK to its Frankfurt-based banking entity as it prepares for Brexit by the end of the year.

International banks in London are boosting their European operations as the prospect fades for an accord on financial services between Britain and the EU. Banks expect to lose “passporting” rights when the Brexit transition period ends next year. These rights allow them to operate in any EU country without being subject to further authorisation.

JP Morgan’s chairman and chief executive Jamie Dimon said in 2016 that the bank could cut as many as 4,000 roles from the UK as a result of Brexit. It told staff in September that 200 roles were being transferred out of London.