Italy’s UniCredit on cusp of €3bn deal with Amundi 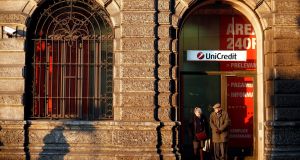 UniCredit is set to agree the sale of asset manager Pioneer to France’s Amundi for more than €3 billion, boosting its capital as Italy’s largest bank moves to differentiate itself from distressed Tuscan rival Monte dei Paschi di Siena.

The likely deal with Amundi, which sees off rival bids from Poste Italiane and Ameriprise, comes ahead of Milan-based UniCredit unveiling a turnaround plan under new chief executive Jean-Pierre Mustier on December 13th.

The plan is expected to involve Mr Mustier announcing a capital increase of €13 billion alongside asset sales – including the disposals of Pioneer and its Polish business Pekao – people with knowledge of the matter say.

UniCredit is also planning to spin off a €50 billion portfolio of gross non-performing loans and to sell a tranche to one or several anchor investors. Fortress, Cerberus and Pimco are among the bidders, say three people.

The move by Italy’s only globally significant bank comes as it seeks to strengthen a fully loaded common equity tier one ratio of 10.8 per cent – at the lower end of European peers – on its own terms rather than have a course of action imposed on it by the regulator.

Mr Mustier’s plan also seeks to put clear water between UniCredit and Monte Paschi, Italy’s third-largest bank by assets and the worst loser to emerge from European stress tests of the sector in July.

The European Central Bank supervisor has set a deadline of the end of the year for Monte Paschi to raise €5 billion of capital and sell off €28 billion of gross non-performing loans. UniCredit has more time to complete its planned recapitalisation.

Weighing on capital plans at both banks is the outcome of Italy’s referendum on constitutional reform, due to be announced late on Sunday. Reformist prime minister Matteo Renzi has said he will quit if he loses, which analysts fear could unleash political and market instability.

Davide Serra, founder and chief executive of Algebris Investments, an investor in bank bonds and shares, says pricing of UniCredit’s equity raising will depend on the outcome of the referendum.

“With Yes it will be higher, with No it will be lower, but it will still go through. There will be a period of volatility but it is not a nightmare,” Mr Serra says.

The success of Monte Paschi’s capital increase is considered to be more closely tied to the referendum outcome, say bankers. The lender, which is 4 per cent owned by Italy’s treasury, announced on Friday it had raised at least €1 billion from a debt-for-equity swap.

Bankers in a consortium led by JPMorgan and Mediobanca are due to decide by the end of Tuesday whether to go ahead with an equity issue to raise the rest of the €5 billion depending on market conditions, say two people familiar with the plan.

If the Yes vote wins, bankers have said that anchor investors including Qatar are expected to buy €1 billion to €2 billion of Monte Paschi’s new equity.

Lorenzo Codogno, a former economist in Italy’s treasury, said in a note on Sunday that should Mr Renzi step down and there be a prolonged political crisis, financial markets would start to “get jittery again”.

“Probably the capital increase of Monte Paschi will be postponed or outright cancelled and other operations [at UniCredit and some smaller banks] will be stalled” in that scenario, he said.