‘I’m not going to walk around like David Brent, having stupid conversations’ 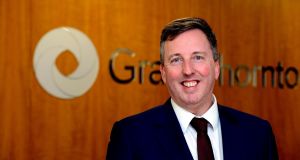 Grant Thornton managing partner Paul McCann: “We would all dance around the kitchen every weekend. Me and the kids. I’d put on some tunes and we’d have a bop the lot of us. That’s important.” Photograph: Cyril Byrne

Late next month, Grant Thornton’s managing partner Paul McCann will vacate the corner office he has occupied for the past five years and make way for his long-time colleague and friend, Michael McAteer.

He’ll return to client work, as head of the firm’s financial services advisory unit, hustling for fees again and sitting in its open-plan office with those he has led since 2012.

For a man who brought in fees of between €5 and €6 million a year before becoming managing partner, this should be like riding a bike but he describes the prospect as both “completely scary” and an “exciting challenge”.

“I’m only 46 and, if I’d stayed in the [managing partner’s] job, I’d be in my 50s and it would be hard to return to client work. I’d just be an old codger,” he says. “At least now, I’ve a chance of getting back chargeable again and getting another run.”

He could have had an extra lap as head of the firm but “change is good and the longer you hold on to power, you go stale and people stop listening to you”.

“It’s the right thing to do. Mick is the best accountant I’ve ever met and we’re lucky to have him.”

High praise for McAteer, a fellow insolvency practitioner, who has a hard act to follow. On McCann’s watch, Grant Thornton has gone from 30 partners and 420 staff in 2012 to 48 partners and 1,200 employees today.

In May, it announced plans to add 250 staff over an 18-month period for a centre of excellence connected with compliance reporting, while a new office block to house the entire firm is being built close to its existing premises on City Quay on the southside of the Liffey.

Growth came through a mixture of organic and acquisition. The firm opened offices in Cork and Galway, and took over the Belfast base that was previously part of Grant Thornton UK, thereby creating an all-Ireland practice. It also acquired Welch & Co in Cork and RSM Farrell Grant Sparks in Dublin, picking up an office in Longford in the process.

“There are more opportunities the smaller you are,” McCann says. “Welch & Co was a €1.5 million practice with good clients. They had UCC and Ford and Cork Opera House. Farrell Grant Sparks was an internationally-networked firm with about €10 million in fees and 120 staff. We can’t think of a bigger professional services merger in Ireland since PwC was created [from the old Price Waterhouse and Coopers & Lybrand].”

McCann also cites a number of senior hires from outside the firm, including John Gleeson from Crowe Horwath, Fergus Condon from EY, Dwayne Price from the Central Bank, who started up its quantitative risk team, and Paul Jacobs, also from EY, who is head of forensic accounting.

“To be able to do that, you have to be authentic, you can’t be bull****ting because they’ll ring somebody and Ireland’s a village. And the next thing they want to know is ‘are you growing?’ because if you are, there’s room for everybody [at the top table].”

He says the growth strategy was “very deliberate” while acknowledging that pursuing such a plan is a bit trickier in a partnership, where everybody has a skin in the game.

As well as being head of the country’s fifth-largest audit and accounting firm, McCann is also one of Ireland’s leading insolvency practitioners. A search of the Companies Registration Office shows him listed as the administrator, examiner or such like to 630 entities.

He was appointed as joint administrator in 2010, along with his colleague McAteer, to Quinn Insurance – the biggest such case in the history of the State and one that continues to this day.

“On the restructuring side, we were the only firm that added partners. When the recession hit, we said clients are going to want scale, so we scaled up for it. ”

How can you be a managing partner on the one hand while being involved in so many insolvency cases?

He says Grant Thornton is not “part of the establishment”, arguing that the Department of Finance gives “all the work to the Big Four [Deloitte, EY, KPMG and PwC]. KPMG got IBRC, for example.”

The fees charged by lawyers and accountants in insolvency cases have come under the spotlight in recent years. Grant Thornton has so far earned about €22 million from its work as administrators to Quinn Insurance. It’s a hefty sum.

“Yeah, but it was a difficult assignment,” McCann replies. “It was a lot of hours, a lot of pressure, and a lot of work.”

Are such fees justified?

“People don’t know how good a job Mick did on that. We managed to sell it [to Boston-based Liberty Mutual]. Would anyone else have got Liberty in to buy it? Because there weren’t many others interested in that situation.

“You are weighing up cost on one side and value on the other. It’s hard for people to get their heads around that. Mick would always say there’s about 100 people in the country who would know what a good job we did and you’ve got to accept that everyone else will criticise you.”

Talk of the Big Four brings us to Grant Thornton’s position in the Irish market. It is effectively the biggest of the second-tier firms – those outside the Big Four – a position that McCann is perfectly comfortable with.

He has no illusions about breaking the oligopoly, preferring for Grant Thornton to focus on its strengths, and to establish its expertise in certain areas of the market.

“There’s not much point in talking about it, it’s just not going to happen, but that doesn’t mean we can’t be a good firm or known as a quality firm doing quality work, particularly in certain segments. Let’s focus on things we can change and be happy with what we achieve there. Forensic accounting and restructuring in credit unions, and media, and renewables, for example.”

The Big Four firms knocked on his door “once or twice” over the years but he remained loyal to Grant Thornton. “Life would have been easier and the brand brings in work, more money. But I didn’t go. Maybe it sounds corny but I joined here when we were €2 million [in fees] and 40 people. There were two people in advisory, now there’s about 400. There’s a power in that.”

His new role will involve trying to win mandates from local and international banks in restructuring, regulatory services and general consulting.

“I don’t know, about €400 an hour. I’m not going to charge huge money. I’m not walking back in as a big gunslinger. I’ve been largely in a management functions for the past five years so I’ve got to build up my reputation again.”

McCann isn’t your stereotypical accountant. He likes all forms of music, and loves to have a “bop” with the kids at home each weekend.

“I love reggae, a bit of punk, I love all the 80s bands. Music is life. We would all dance around the kitchen every weekend. Me and the kids. I’d put on some tunes and we’d have a bop, the lot of us. That’s important.”

As a leader, he likes to hear “laughter” around the office. “It’s a sign that you’re doing something right. For me, people singing or laughing around the place, that’s what you want.

“I’ll tell you how it’s all going to end, we’re all going to die. We’re on this rock for a flash of time and I don’t want people out there antsy and worried. We’re serious about what we do and how we serve our clients but we want to have fun.

McCann hails from Bunting Road in Walkinstown, south Dublin. His father was a truck driver and his mother, who is now 90, a housewife. The last born of five children, there was a 20-year gap to his siblings.

His father worked long hours. “He was never there. He never came to a GAA match or a soccer match but I loved him just as much. It never bothered me,” he says, adding that his father was a “very gentle” man.

As he got older, McCann would often be called upon to help his father on the truck.

“There’s a nice simplicity to the job. You get from A to B and you’re in charge of your own day. I used to enjoy it. I used to go a lot with him...if for some reason he couldn’t get a helper. I’d just be told ‘you’re not going to school tomorrow’.”

School was Drimnagh Castle, and he did business studies in the former College of Commerce in Rathmines, graduating in 1993. “I applied for about 70 jobs but there were no jobs back then in Ireland . So I applied for accountancy, not out of any great love for it but just because you could get a training contract and qualify.”

He joined KPMG in 1994, where he would meet his wife Donna, who is now doing a masters with a view to becoming a school teacher.

While at KPMG, he also ran a market stall in Blackrock, Co Dublin, first selling clocks before buying a creperie business.

“It went well except I was working seven days a week. I never had a moment off. You make your money on the coffee, not on the pancakes. With coffees, you just go ‘shsh’ and pour into a cup.

“The smoke [he’s since given up] you had at the end of the day working on the creperie was the best smoke ever. My conclusion is that there is money in food but it’s all hard earned. You have to put your heart and soul into it.”

McCann formally steps aside as managing partner on December 31st, leaving him “a bit of time to go on the piss” in the meanwhile.

Did he consider leaving? “Yeah, I did. I’m 18 years here and thought ‘should I try something new?’ But I’d love to see if I can grow a practice again [within Grant Thornton] and be really relevant from a chargeable perspective. That’s a nice challenge to have.

“It’s been a great honour to lead the firm. But I’m really looking forward to next year. If it doesn’t work out then I’ll have to get a job somewhere else. I’ve been 18 years here and there is a sense that it’s still a dynamic place but if I have to go and do something else I will. Just get on with it.”

Something you might expect: “Every business I go into, I’m working out the numbers. It’s like a curse. How is it making money? There’s too many staff, the margins are off.”

Something that might surprise: “I don’t do my own tax return.”