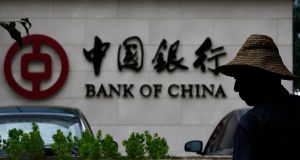 Under the terms of the Bank of China deal, the lender acknowledged the underlying facts as well as the corresponding legal qualification used by investigators, but didn’t plead guilty.

Bank of China agreed to pay €3.9 million to settle a French probe into allegations it turned a blind eye as customers moved millions to their Asian accounts without paying European taxes.

The lender will pay a €3 million fine and €900,000 in damages to French tax authorities to put the criminal allegations behind it, Paris prosecutor Remi Heitz said.

The case will continue against 28 business owners and intermediaries involved in transferring the funds to China, Mr Heitz said Tuesday in a statement.

Bank of China UK is in the the final stages if its taleover of Dublin stockbrokers Goodbody.

The Beijing-based bank had been charged with aggravated money laundering over the transfer of suspect funds worth nearly €40 million to 168 accounts, mostly in the Zhejiang province – south of Shanghai – between 2012 and 2014.

Those charges are dropped as part of the settlement, which was approved by a Paris judge on January 15th and is now final. Bank of China follows in the footsteps of Google and Société Générale in reaching a settlement in France thanks to a US-style tool inaugurated by HSBC in 2017.

While the fine is modest, the Bank of China deal is the first negotiated by Paris prosecutors. The Parquet National Financier had extracted penalties between a €250 million and €500 million a piece from the search-engine giant and the two banks.

Under the terms of the Bank of China deal, the lender acknowledged the underlying facts as well as the corresponding legal qualification used by investigators, but didn’t plead guilty.

Bank of China said in a statement that it always strives to comply with anti-money laundering laws and is constantly reinforcing measures to do so. The Chinese lender added that the case concerns mostly the transfer business of a subsidiary in China and has nothing to do with its Paris unit.

As part of the investigation, French authorities accused the Beijing-based bank of standing idly – failing to request any proof of earnings – as account holders with no particular business activity in China received money from commercial businesses.

The funds first passed through companies in France and other European countries such as Spain, Lithuania and Poland before landing in the Asian accounts.

The probe began after a routine check following a red flag. Criminal authorities began investigations in 2013 after the French anti-money laundering body, known as Tracfin, noticed a very unusual increase over a few months in the revenue of a Paris-based shop that specialised in urgent locksmith and plumbing repairs. – Bloomberg

1 Provisional liquidator appointed to Dublin engineering firm
2 How can I view my dead brother’s will if I’m not the executor?
3 Kerry trading profit rises 12.1% in year of mega-deal miss
4 Finance Ireland plans stock market flotation in May
5 US reiterates opposition to Huawei equipment being used for Irish 5G
6 Bank of Ireland staff in line for 2.95% pay increase
7 Bursting of Tesla bubble a case of ‘not if, but when’
8 Must you pay a price for ethical investment?
9 Finance Ireland’s IPO, Huawei and Irish 5G, and pay rises at Bank of Ireland
10 Irish Reits would benefit from property funds overhaul, Davy says
Real news has value SUBSCRIBE