Goldman Sachs and Bank of America disappoint on profits 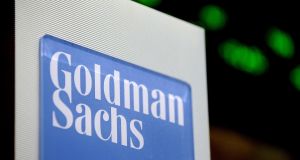 a surge in litigation charges led Goldman Sachs to miss earning expectations for the second quarter in a row. Photograph: Justin Lane/EPA

Disappointing earnings updates from Bank of America and Goldman Sachs weighed on the S&P 500 banking sector even as the broader S&P 500 set an intraday record for the sixth consecutive trading session.

Bank of America got stung by lower interest rates in the fourth quarter, sending its profit down 4 per cvent, with management saying that it expects the trend to continue this year.

Meanwhile, a surge in litigation charges led Goldman Sachs to miss earning expectations for the second quarter in a row.

The Wall Street giant suffered a 26 per cent fall in net income in the three months to the end of the year, a performance starkly worse than rival JPMorgan Chase, which reported record profits for both the quarter and the 2019 year.

Litigation provisions took more than $1 billion off the bank’s bottom line, leaving it with net income of $1.7 billion in the quarter – well below the $2 billion expected by analysts in a Bloomberg poll.

The bank did not disclose with what was behind the provisions but they were likely to be related to final negotiations over the 1MDB bribery and money-laundering scandal.

Revenues across the group rose 23 per cent, to $9.96 billion, for the quarter, fuelled by a 63 per cent surge in fixed income revenues versus a year earlier.

Investment banking was Goldman’s worst performing division in the fourth quarter, with revenues falling 6 per cent year-on-year, versus a 6 per cent rise at both Citigroup and JPMorgan Chase.

At Bank of America, shares fell 2 per cent in morning trading after chief financial officer Paul Donofrio said net interest income will decline through the first six months of 2020.

The lender is especially vulnerable to rate movements because of the composition of its balance sheet. As the Federal Reserve cut rates three times last year, analysts predicted Bank of America’s earnings would suffer.

The bank blunted the impact last quarter by growing loans at a rapid clip, and managed to beat Wall Street’s quarterly forecasts.

Mr Donofrio expects to improve that metric later in the year by growing loans and reducing interest rates on deposits, but predicted Bank of America’s net interest income will be “modestly” lower for the full year.

The bank’s results were helped by bond trading, whose revenue rose 25 per cemt to $1.8 billion.

The bank’s net interest margin, which measures how profitably a bank can lend out depositors’ funds, fell to 2.35 per cent from 2.52 per cent a year earlier, and from 2.41 per cent in the prior quarter.