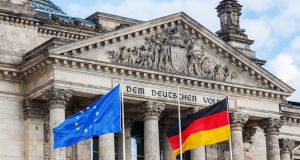 Germany could make it easier to hire and fire senior bankers in a move intended as a sweetener for global banks who want to move staff to the continent after Brexit but are worried about laws making it hard to sack them. (Photograph: iStockPhoto)

Germany could make it easier to hire and fire senior bankers in what would be a rare exception to its strict labour rules, an ally of Chancellor Angela Merkel said, as Frankfurt seeks to attract finance groups from London after Brexit.

The move, which would apply to those earning more than around €250,000, is intended as a sweetener for global banks who want to move staff to the continent after Brexit but are worried about laws making it hard to sack them.

“We do not need the German protection against redundancy for top earners in banking,” Volker Bouffier, vice chairman of Merkel’s Christian Democratic Union (CDU) told Reuters in an interview.

“I see a political prospect of changing this law by the middle of next year or in the Autumn (of 2018), once the new government is in place.”

Germany is holding national elections in September, with Merkel’s conservative bloc expected to emerge as the strongest party group.

“I have discussed this with the German chancellor, Angela Merkel, and she is supportive, as is the finance ministry,” said Bouffier, who is also premier of the state of Hesse, home to the country’s financial centre, Frankfurt.

The pledge comes as the competition between rival centres, including Dublin, Paris and Frankfurt, gathers pace, with global banks expected to chose one of these cities as a base for doing business within the EU in the coming weeks.

Lobbyists promoting Paris as a financial centre have also sought to loosen rules governing dismissals but the idea was rejected by the country’s previous government.

France’s new president, Emmanuel Macron, may be open to making such a change. However, Macron’s En Marche party is new and may be forced to govern in a coalition, making the country’s political future uncertain.

Bouffier said he expected the majority of big global US banks to chose Frankfurt as their primary location within the EU.

“The British government has been telling everyone in London that ... everything will stay as it is, including with passporting to Europe, ” he said. “That is complete nonsense. I don’t think it will work out for Britain.”

Banks that now use London as a springboard for selling services across the European Union fear they will lose access to that market when Britain leaves the bloc, prompting them to seek a foothold elsewhere.

Bouffier said he had Merkel’s backing in winning banks for Frankfurt. Many German politicians have been reluctant to speak out in favour of the industry, with memories of the financial crash it caused still vivid.

“Germany offers stability,” he said. “I expect concrete decisions from banks in summer. They are not going to wait for the outcome of (Brexit) negotiations.”

Although senior managers at German companies are currently exempted from full legal protection against sacking, extending this, say, to bankers would be contentious. Bouffier said it could be done based on the legal definition of the banker’s role.

A spokesman for Verdi, one of the biggest trade unions in German financial services, said it would not support such a change.