Enda Kenny called to give evidence at banking inquiry 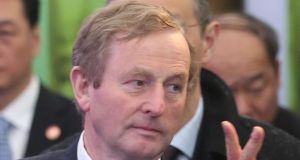 File photograph of Enda Kenny. Mr Kenny has been called to give evidence at the banking inquiry, along with Tánaiste Joan Burton. File photograph: Niall Carson/PA Wire

Taoiseach Enda Kenny, Tánaiste Joan Burton and Minister for Finance Michael Noonan are among 12 people sent letters today by the Oireachtas banking inquiry asking them to attend the committee and give evidence on the events leading up to and after the financial crash.

Others called include former taoiseach Bertie Ahern, John Corrigan, the former chief executive of the National Treasury Management Agency, and former trade union leader David Begg, who was a member of the Central Bank commission.

Also included in the sixth tranche of witnesses is Richard Bruton, the Minister for Jobs, Enterprise and Innovation, former tánaiste Mary Harney, former Labour Party leader Pat Rabbitte, and Pat Farrell, who was chief executive of the Irish Banking Federation before becoming the head of corporate communications at Bank of Ireland.

It is understood that another tranche of letters will be issued tomorrow, including to a number of former senior bankers.

These are set to include Seán FitzPatrick, the former chairman of Anglo Irish Bank, Michael Fingleton, who headed Irish Nationwide Building Society for before its nationalisation, and former Anglo chief executive David Drumm, who is living in the US.

Some international organisations, including the IMF, will also be requested to appear before the committee.

Committee chairman Ciarán Lynch said this tranche of witnesses would centre on the second phase of banks to come before the inquiry.

“Nexus phase hearings will run until the middle of September, with a total of 66 public hearings planned, with more than 90 witnesses called,” he said.