PTSB loans move could deliver reprieve for thousands of homeowners 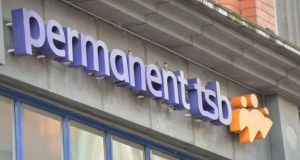 Permanent TSB is seeking regulatory approval to reclassify €900 million of restructured mortgages as performing loans. That would allow the lender to pull the debt from a massive portfolio sale.

It would deliver a reprieve for borrowers behind 4,300 homes from having their loans sold on – most likely to overseas funds – as the bank seeks to resolve its bad-loans problem a decade after the financial crisis began.

Speaking to reporters after the lender revealed that it had returned to profit last year for the first time in 10 years, executives said that PTSB has formally asked the European Central Bank (ECB) to allow it reclassify so-called split mortgages as performing loans.

The matter is under consideration by a working group involving members of the ECB’s banking supervision arm and the European Banking Authority (EBA), they said.

“We would be hopeful that we would get an answer on that,” said Stephen Groake, chief risk officer at the bank, adding that the bank had not received an indication yet on when it may receive an answer.

PTSB has been the main user among Irish banks of a split-mortgage solution for troubled loans in recent years, where repayments of interest and principal on part of a loan are put off to a future date, or warehoused, for when a borrower’s circumstances improve. However, under EBA rules, these continue to be categorised as non-performing loans (NPLs).

The bank unveiled plans in February to sell €3.7 billion of soured debt as it seeks to cut its 26 per cent NPL ratio, by far the highest among Irish banks, to below 10 per cent by 2021. The bank is under regulatory pressure to cut its ratio to the European Union average, which stands at about 5 per cent, over time.

Some €900 million of the loans for sale in a portfolio called Project Glas comprise split mortgages.

Sources said that a favoured option allowing the reclassification of the split mortgages would involve the bank technically converting bad-loans provisions taken against the warehoused portion of the loan into a debt write-off for accounting purposes. This would crystallise a loss on the balance sheet, allowing the bank to draw a line under the debt issue.

However, the borrower would still be liable for the warehoused part of the loan.

Another solution believed to be under consideration would involve PTSB refinancing the split-mortgage portfolio in international bond markets through a process known as and off-balance-sheet securitisation. While such a deal would allow the bank to derecognise the loans from its balance sheet, reducing its NPLs, the borrowers’ relationship will continue with PTSB as before.

Meanwhile, the bank’s annual report shows that the number of properties in its possession had surged to 1,809 at the end of December from 482 a year earlier. This was driven as landlords behind 1,300 buy-to-let properties took up an offer from PTSB last year to surrender the premises in return for any shortfall on its sale against the size of the loan being written off.

Tenants remain in place in about two-thirds of the surrendered properties. The bank plans to sell the units through a number of channels, including auctions, and to housing agencies and not-for-profit organisations.