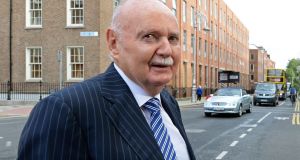 The Central Bank inquiry into alleged breaches of lending practices at Irish Nationwide Building Society (INBS) is looking to recover a diary kept by the former personal assistant to ex-managing director Michael Fingleton.

The legal team assisting the inquiry has asked the Central Bank’s enforcement division to try to locate a diary and a message book maintained by Melody van der Berg. It is believed they might contain evidence of Mr Fingleton’s involvement with the failed lender’s credit committee.

This module of the inquiry is exploring whether the committee failed to adhere to internal policies by not reviewing cases of large commercial loan arrears, exposure to specific sectors or customers, or issues raised by internal audit, outside advisers or regulators.

Mr Fingleton has said he was not a member of this committee until the end of 2007, but this has been contradicted by others, including Ms van der Berg, who said she believed Mr Fingleton attended its meetings during her time as his PA. When she was transferred to another department, which she recollects was in mid-2006, the diary and message book were left with her successor.

The inquiry also heard from Martin Noonan, a former Bank of Ireland executive who provided INBS with mortgage services from the point at which loans are drawn down onwards. Mr Noonan recalled a conversation with Mr Fingleton in which the latter said INBS engaged in “different lending” from that at Bank of Ireland.

The former INBS boss asked Mr Noonan to join the credit committee in 2006, despite his lack of lending experience. He initially declined, leading to a “bit of a barney”, and ultimately “didn’t have a choice”.

He said the minutes “captured the decisions” taken at the committee meetings, but they would not have documented all of the discussions that were held at them, despite this being part of the committee’s terms of reference. He agreed it was his understanding that a recommendation by auditors KPMG that the results of a string of credit reviews should be formally reported to the credit committee was not implemented.

Some younger members of the committee were “there to learn” and may have felt “intimidated” or that “they couldn’t ask a question”.

The inquiry is seeking to establish if Mr Fingleton and three other former managers of the building society were involved in seven so-called contraventions at INBS between August 2004 and September 2008.