The coronavirus outbreak has inflicted a major shock to global growth and governments will need to mount an ambitious fiscal response to counter its affects, says ECB President Christine Lagarde. Video: Reuters 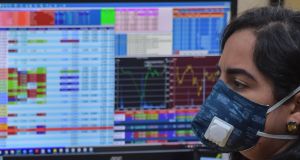 “There is no liquidity in the market - nobody is buying. The next seller just has to take lower again”

About €2.4 billion has been wiped off the value of the State’s shareholding in AIB and Bank of Ireland as a result of the coronavirus-driven sell-off in stocks.

Shares in Irish banks have taken a pounding since the outbreak spread to Europe last month, shedding 40per cent to 50 per cent of their value.

Shares in AIB, which is 71 per cent State-owned, fell a further 12 per cent to €1.27 on Monday, and are now down 47 per cent since the middle of last month. This has wiped nearly €3 billion off the market value of the company, which translates into a €2.1 billion loss for the State.

Bank of Ireland has seen about €2 billion wiped off its market value since the sell-off began. The bank’s shares fell a further 9.4 per cent to €2.10 on Monday, and are 49 per cent below where they were last month.

As a result the value of the State’s 14 per cent stake in Bank of Ireland was worth around €300 million less.

With massive disruption to supply chains and layoffs across several sectors, “the Irish banks are looking at higher levels of bad debt going forward”, a senior market analyst said.

“There is no safe haven in terms of equities,” he said. “Normally you’d get a couple of defensive sectors, but this time around everything is getting smoked.”

He said the sell-off was being compounded by automated or algorithmic trading, which see shares sold automatically at certain price points.

“There is no liquidity in the market – nobody is buying. The next seller just has to take lower again.”

Permanent TSB closed 3 per cent down at 65 cent in trading on Monday, and is down by over 40 per cent over the past month.

“While we don’t comment on share price, the banking sector is one of a number of sectors being impacted by current market volatility,” a Permanent TSB spokeswoman said.

An AIB spokesman said:“AIB is actively engaging and collaborating closely with our stakeholders across the economy to ensure we meet the challenges that are developing at a rapid rate.”

Since their recent peak almost a month ago, European banks indices have plunged 40 per cent in an indiscriminate sell-off of financial stocks. This outpaces the 25 per cent fall over the whole of 2018. European bank shares now trade at the lowest level since the 1990s.

The declines come as Europe’s banks face a major test of their resilience amid growing fears about the coronavirus pandemic and an oil price war. – Additional reporting by Financial Times