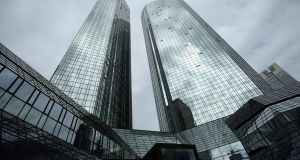 The Deutsche Bank headquarters in Frankfurt.

Deutsche Bank has drawn up plans to cut between 15,000 and 20,000 jobs as part of chief executive Christian Sewing’s push to shrink dramatically the lender’s investment banking division.

The potential job cuts were included in proposals presented to members of Deutsche’s supervisory board and regulators earlier this week, according to a source.

The headcount reductions would be equivalent to roughly half of all investment banking jobs at Deutsche, although it is unclear whether the cuts will also affect the bank’s other divisions. It represents about a fifth of Deutsche’s total workforce of about 91,000. Last year, the lender cut 7,000 jobs.

“There has been significant progress over the last week, but the full package is not yet ready,” said a second person briefed on the plans

Deutsche declined to comment on the scale of any potential job cuts, adding: “[The bank] is working on measures to accelerate its transformation so as to improve its sustainable profitability. We will update all stakeholders if and when required.”

The job cuts under consideration are one of the clearest indications so far that Mr Sewing is serious about scaling back Deutsche’s struggling investment bank following years of poor performance. The potential cuts were first reported by The Wall Street Journal.

Earlier this month, the Financial Times reported that Deutsche was preparing a dramatic overhaul of its trading operations, which would involve closing or drastically shrinking its equity and rates trading operations outside of continental Europe.

Deutsche is also working on the creation of a “bad bank” that could house or sell up to €50 billion of assets after adjusting for risk.

Under the plans, which could be unveiled alongside the bank’s half-year results next month, the bank would retain stronger units such as its bond trading business and its currency-trading operation.

In addition to shrinking the investment bank, Mr Sewing and executives are set to unveil a renewed focus on transaction banking and private wealth management as the lender tries to find new sources of revenue.

Deutsche’s Wall Street operation is expected to bear the brunt of job cuts, prompting officials at the Federal Reserve to ask executives to explain the potential impact of the “bad bank” plan.

The German lender’s investment bank has weighed down on earnings in recent years, and made losses in the past two quarters. Along with a series of fines for misconduct scandals, the poor performance of its core business has driven down the bank’s share price to the lowest levels in its 149-year history.

Investor sentiment towards the group deteriorated further in April following the collapse of merger talks with rival Commerzbank.

Shares in the bank, which closed at €6.78 on Friday, dipped below €6 for the first time earlier this month. – Copyright The Financial Times Limited 2019