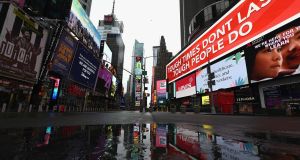 St Louis federal reserve chair James Bullard has predicted the US unemployment rate may hit 30 per cent in the second quarter.

More than 22 million American have lost their jobs in the last four weeks as the coronavirus pandemic has swept across the US, according to government figures.

The US labour department announced on Thursday that another 5.24 million people filed for unemployment benefits last week, making a total of 22.2 million since March 14th when nationwide stay at home orders led to an unprecedented wave of layoffs across the country.

The largest number of people to ask for unemployment benefits in a four week period before the Covid-19 crisis came in 1992 when 2.7 million sought support.

The torrent of layoffs has swept across the country, and every sector of the economy, leading to backlogs and anger at state unemployment offices as people have struggled to make claims. The delays are likely to trigger further spikes in the figures in coming weeks.

’Hit by a hurricane’

“It’s akin to the entire country being hit by a hurricane,” said Jason Reed, assistant chair of finance at the University of Notre Dame. “And we don’t know when the hurricane is leaving.”

While workers in hospitality, food services, retail and transport were among the first affected, workers in manufacturing, construction, media and even health services have also been hit.

Juli Hunt picked up her first unemployment insurance check on Tuesday, about a month after getting laid off. The construction firm she worked for was having one of its best years ever when Covid-19 turned the industry upside down.

“As soon as they said shelter in place, my company laid off 20 people,” Hunt said.

Hunt (47) said a few job opportunities have become available in the small sector of the industry which has oriented itself to emergency services and coronavirus response. But the market is also clogged with newly unemployed people – eight people Hunt knows well were also laid off in the past few weeks.

Her former employer, where she worked for more than six years, cut 20 per cent of its jobs and the remaining staff face large pay cuts. Her boss said he was doing what he had to do to keep the company alive.

Despite the bleak picture, Hunt is hopeful.

“I think that this will pass,” said Hunt, who lives outside Sacramento, California, with her three children and her husband, who works in healthcare.

Hunt said: “It’s not ideal, but I think when things like this happen you just have to take it day by day.”

Officially the unemployment rate was 4.4 per cent in March, rising for the first time after a record 113 months of growth.

But the government figures have yet to absorb the record number of new benefit claims, and the real figure is likely to be close to 20 per cent, according to William Rodgers, former chief economist at the department of labour and now professor of public policy at the Bloustein School for Planning and Public Policy at Rutgers University.

St Louis federal reserve chair James Bullard has predicted the US unemployment rate may hit 30 per cent in the second quarter. There were roughly 163 million people in the US labour force in March, which would equate to the loss of 48.9 million jobs.

Reed said unemployment claims were likely to rise at 3 to 6 million a weeks for weeks to come. “This could easily move to the summer,” he said.

The unemployment claims numbers were the latest in a series of gloomy economic statistics to be released this week. Retail sales fell by a seasonally adjusted 8.7 per cent in March from a month earlier, the biggest month-on-month decline since the records began in 1992.

Meanwhile, US industrial production fell a seasonally adjusted 5.4 per cent in March, its biggest monthly drop since 1946.

Unemployment is surging worldwide in the wake of the pandemic. In the UK, the office for budget responsibility has predicted that joblessness could hit 10 per cent by the end of June.

Australia is also bracing for 10 per cent unemployment. Spain and Italy are expecting sharp rises in layoffs.

This week, the International Monetary Fund slashed its forecasts for global growth in response to the pandemic and warned that the global slump in economic activity this year would be unparalleled since the Great Depression of the 1930s.