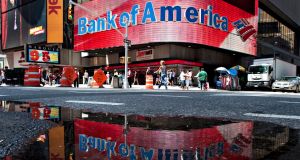 Bank of America is one of only two non-French lenders that have thus far chosen Paris as a destination for some significant operations. Photograph: Jeremy Bales/Bloomberg

Bank of America signed a lease for office space in Paris, formalizing plans to move its European trading hub to the French capital after Brexit, people familiar with the decision said.

The US lender agreed to rent about 9,300sq m in a building at 51 rue la Boetie in the 8th arrondissement, large enough to accommodate about 1,000 workers, said the people, asking not to be identified because the information isn’t yet public. Located not far from the Arc de Triomphe landmark, the space is being modernized by a unit of France’s postal service, La Poste, which owns the building.

John McIvor, a spokesman for the Charlotte, North Carolina-based Bank of America, declined to comment, as did a spokesman for Poste Immo, the building’s manager and developer.

Bank executives are considering whether to sublease some of the space to other tenants, the people said. The firm initially plans to locate about 300 employees there, people with knowledge of the matter said last month.

The post office that gave rise to the building’s nickname will continue operating inside the Art Deco-style structure, located between the Parc Monceau garden and the Elysee presidential palace. A video depicting what the building may look like after renovations shows floors of open workspaces and a roof deck.

Bank of America is one of only two non-French lenders that have thus far chosen Paris as a destination for some significant operations. Many global investment banks, including Goldman Sachs and Citigroup, have leased space in Frankfurt for when the UK leaves the European Union. Brexit will likely end passporting, the legal principle that allows banks to service the rest of the bloc from London.

Bank of America’s executives debated internally for months over where to relocate before designating Paris last month. Leaders of the firm’s fixed-income trading unit advocated for Paris, while its chief of equity operations favored Frankfurt, Bloomberg reported in August.

While the main trading location will be in the French capital, the firm is formulating a separate hub for investment-banking operations, people with knowledge of the matter said. Chief executive Brian Moynihan said in July the “preferred location” for the main EU legal entity is Dublin, where the company already has a foreign banking license.

Bruce Thompson the firm’s former chief financial officer, was named to lead the Irish subsidiary being set up to house European banking units apart from the UK He’ll be based in Dublin, according to a company memo. Alex Wilmot-Sitwell, president of the European region, will be chairman of a broker-dealer the firm is creating in Ireland.